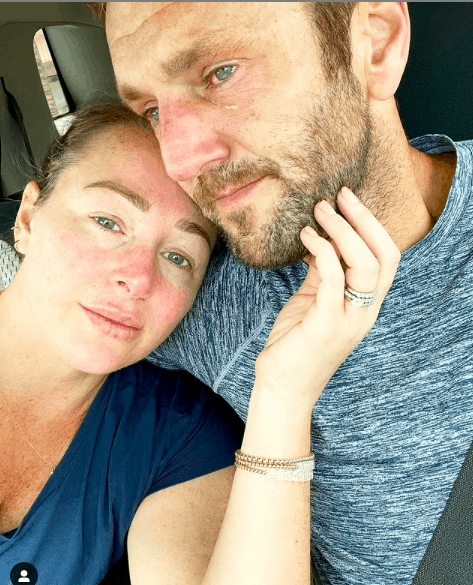 Jamie Otis and Doug Hehner are still married after appearing on the first season of Lifetimes’ Married at First Sight. Now, after seven years of marriage, they are sharing on Instagram that their marriage is currently struggling, but they are fighting for it.

Jamie and Doug married on March 23, 2014 without having previously known each other, and spent their first weeks of marriage on TV. The were one of three couples who decided to try this social experiement, and they continued to stay together and have two children together, Henley Grace (3) and Hendrix Douglas (15 months.) In 2016 they lost their son Jonathon during a miscarriage at 17 weeks of pregnancy.

Below is Jamie and Doug at their wedding. Jamie was reticent at first, and admitted on her wedding day that she wasn’t attracted to her new husband. Jamie was worried that she’d just made the worst decision of her life. She only let him kiss her on the cheek on their wedding day, and all their wedding photos were a bit icy. She wouldn’t even let him hold her hand when they traveled to their honeymoon. 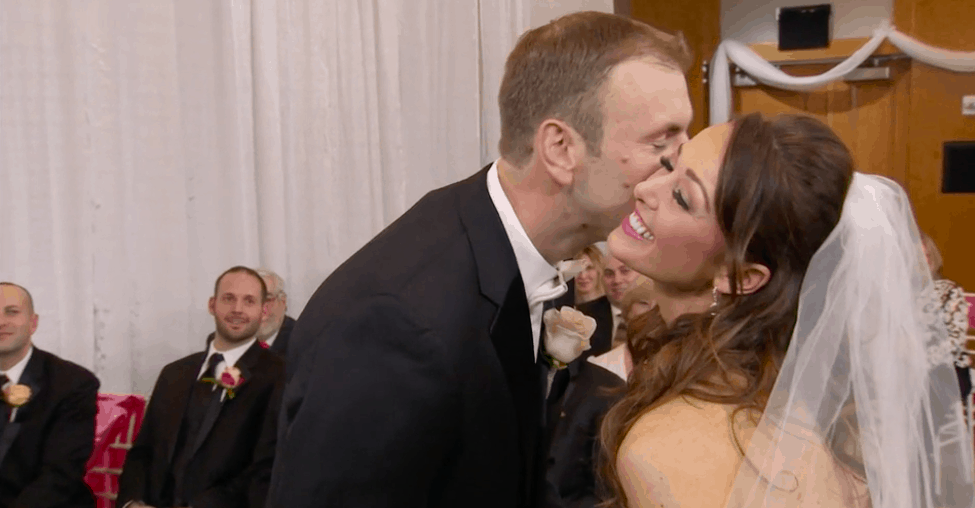 By the end of their five weeks of filming, however, Jamie decided that maybe Doug was the person for her. They had taken a different set of photos where they were kissing and couldn’t get their hands off of her in every photo. Jamie had realized that he had all the qualities that she had wanted in a partner. 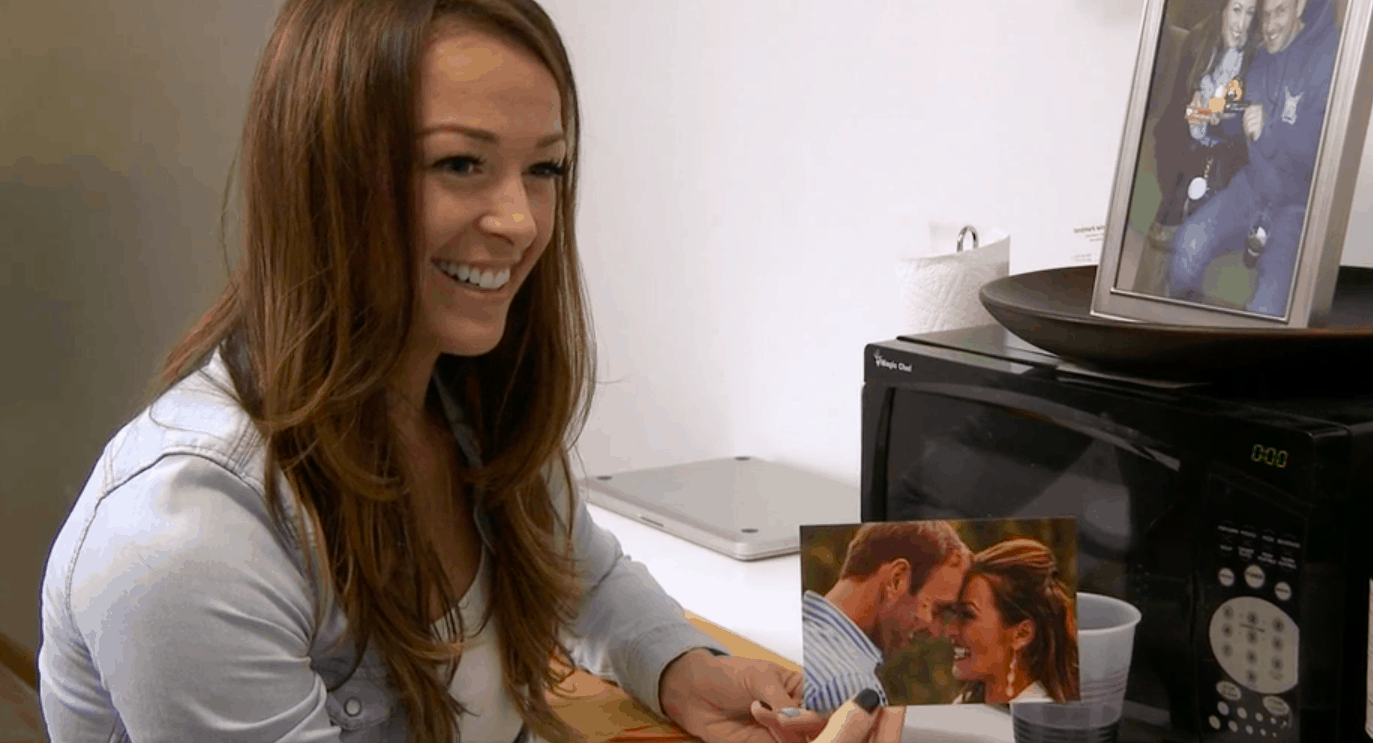 In 2017 Lifetime aired a seven-episode spin-off featuring Jamie and Dough titled Married at First Sight: Jamie and Doug Plus One.

What caused the tears?

On Tuesday, August 9th, Jamie shared a vulnerable photo of herself and husband Doug while they were red-faced and in tears. In the caption Jamie shared that the photo was taken in the aftermath of a phone call with a therapist in which they were yelling and blaming each other. The heated exchange ended with tears and an embrace.

“We’re not giving up on each other—not now, not ever,” Jamie wrote in her caption. “TBH, sitting in the car in a random parking lot crying-like the hard ugly cry with snotty noses & hiccups-was not at all what I intended on sharing today…but here we are.”

“It started w anger, yelling, blaming,” she wrote, “but ended w us holding each other & trying to figure out our next steps TOGETHER.”

Jamie had originally planned to share some body positivity content on Instagram, but was too overwhelmed with the fight with her husband to make that type of content. She wanted to show her reality in that moment instead of a “pretty picture.”

She went on to share that she’s a fighter, and has since she was an infant when her mother planned to adopt her, but decided not to at the last minute. She promises to fight for her marriage, for her family, and for herself. She then pledges to then get back to fighting for her Instagram audience, and all the women of the wnrld.

Below is the full text of Jamie’s caption, including the emojis.

“We’re not giving up on each other—not now, not ever.🙏💍👰🏼 TBH, sitting in the car in a random parking lot crying-like the hard ugly cry with snotty noses & hiccups-was not at all what I intended on sharing today🙈…but here we are🤪⁣
⁣
We just finished a heated call w our therapist👀 It started w anger, yelling, blaming..but ended w us holding each other & trying to figure out our next steps TOGETHER🙏😭…gosh, a good therapist is everything!💯❤️⁣
⁣
I had planned on sharing more “body positive” content to encourage my girlfraaans on here to find confidence, love, & strength from within…but honeslty, right now I feel like that just isn’t my own reality.⁣
⁣
I’m not gonna slap a smile on my face and pop up a pretty picture if that’s not my true reality…that feels so fake and wrong.⁣
⁣
Ive never been one to curate my ig “page” to be aesthetically pleasing…not because I didn’t try to bc at one point I def did.🤪⁣
⁣
But that’s just not me.🤷🏼‍♀️⁣
⁣
I’m a multifaceted, ever-changing person who is a complete mess at times…and lately, I feel like I’ve been a mess ALL of the time.🤦🏼‍♀️⁣
⁣
BUT…⁣
⁣
I’m a fighter. I have been since the day I was born & my mama had plans to adopt me out. The couple was at the hospital ready to take me home but my mom said she took “one look” at me and knew she had to keep me.⁣
⁣
I was legit born a fighter.😉💪 ⁣
⁣
I will fight for YOU. (I freaking love my girlfrans. I have the BEST community on my lil corner of the gram! You are so loving and supportive & I will always love & support you back!💯)⁣
⁣
I will fight for my close friends….I don’t have many but the ones I do have are rock solid.⁣
⁣
I will fight for my family! I mean, sometimes more than they even want me to…🙈😆⁣
⁣
But right now, I’m fighting for my marriage. For my children. For ME.🙏❤️⁣
⁣
When I get to the other side of this battle I will be back here fighting for YOU and for all of US WOMEN again.💯⁣”