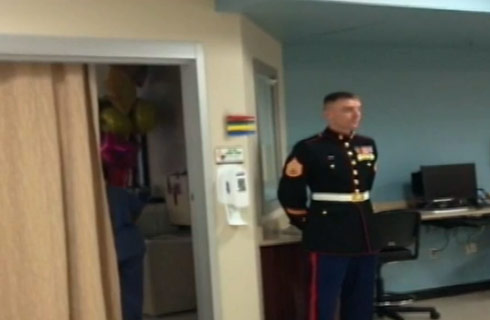 “Leave no man behind” is one of the creeds that a U.S. Marine lives by. This dedication to their fellow-man shown greatly when young Daran Wankum gave up on his dream of becoming a member of the elite fighting force after he was diagnosed with a brain tumor.

Wankum’s grandfather had served as a marine and he desperately wanted to follow in his footsteps. After signing up at the age of 18, he began to get double vision. Following trips to the doctor, his father Eric got the call that no parent ever wants to receive. “I didn’t think at all. I stopped the car and started crying, that’s what I did for five minutes,” he said.

Daran had been diagnosed with brain cancer and the doctors stated that his tumor was large. “I was in shock at first,” Daran Wankum said. “I didn’t think this could be real. I thought it wasn’t. I thought it was a big old dream or something.”

Part of what made the news so devastating was that Daran believed his hope of becoming a Marine was permanently vanquished. It was during this time that Daran and his family learned about the true grit and calling of those he wanted so badly to call brothers.

Right before his surgery, the recruiters from his local Kansas office where he had signed up stood guard by his door for 24 hours. Further proving their mettle, Daran and his family were flown to the nation’s capital where Daran attended a ceremony in which he was bestowed the honor of being made an honorary Marine. Only 22 other people in Marine Corps history have been given this award.

In spite of the diagnosis, Daran’s focus and fight have been unwavering as he has every intention of beating cancer and he dreams once again of becoming a Marine. Being able to say that I had cancer, that’s going to feel great,” he said.

UPS halts donations to Boy Scouts because of ban on gay scouts, leaders