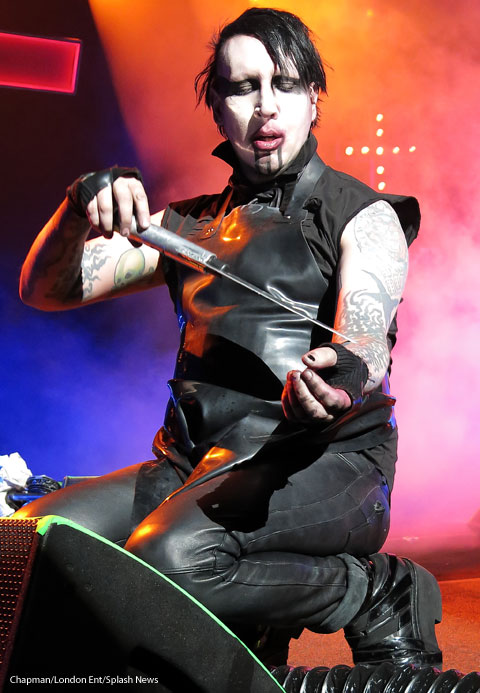 Paris Jackson, who is recovering after a suicide attempt this week, is a Marilyn Manson fan, so it’s a nice gesture that the goth rocker dedicated a song to her during his Thursday night show. But in a less tasteful move he also simulated cutting his wrist during the performance, which is the method Paris reportedly used to harm herself.

He dedicated the song “Disposable Tears” to the teen, and also sent a message of support directly to Paris, telling her, “I hope you feel better. You will be on my guest list anytime you want.” Paris was reportedly upset about not being allowed to go to a Marilyn Manson concert on a school night, the night before her suicide attempt. Just to make it very clear, we are not trying to say that Paris attempted suicide because she was unable to go to a concert, just that this happened, and Marilyn Manson heard about it.

His support is gracious, but the simulated self-harm went too far. Alan Ross, Executive Director of NYC suicide prevention groupp The Samaritans told the MailOnline that Marilyn’s act could potentially send a harmful message to anyone considering suicide:

“Everyone in the suicide prevention field agrees that graphic depiction of self-harm is a provocative act that does impact people who are in distress in a manner that is very counter-productive and harmful. Even in creative environments there should be some sense of social responsibility that is aware of the impact of actions and messages.”

Marilyn Manson isn’t the only high-profile person to send Paris a message, Dr. Conrad Murray, who is currently serving jail time for his involvement in her father’s death, sent her a lengthy, emotional voicemail.

What do you think? Was Marilyn Manson’s provocative stunt on stage dangerous?