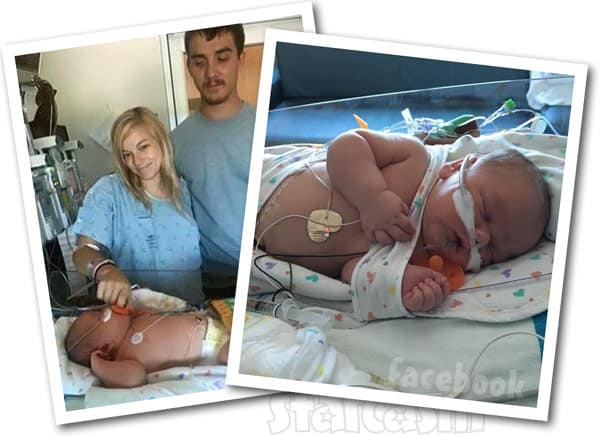 Teen Mom 3 star Mackenzie McKee welcomed her third child, son Broncs Weston McKee, on Monday, but little Broncs is still in NICU due to complications with his heart and lungs. Mackenzie’s mom Angie has been keeping friends, family, and fans updated on Broncs’ condition, and last night she shared the neonatal doctor’s opinion:

Baby Broncs Weston update:
Ok, it’s been a very crazy day! So crazy words wouldn’t do it justice. so I’ll try to explain the update: The neonatal dr came in this morning to explain Broncs condition with a Nurse practitioner and a RN. He has a small hole in his heart, a large heart, and crowded lungs. Now he has a blood infection and they wanted to do a spinal tap to rule out meningitis. They started him on antibiotics for the blood infection and he will have to be on it for 7-10 days in the hospital. We should have the results in a few days. He is not critical but they said he’s a very sick baby. His blood sugars are stable. But He still can’t be held or fed. Mic may be released tomorrow, maybe Friday! Please keep praying! I have many new gray hairs! Lol

Another update from August 19:

Broncs update: He is jaundice, but getting better. He was tongue tied and couldn’t suck, so they clipped it and hopefully Mic will get to nurse him soon. They r weaning him off the oxygen and he is now handling it much better then before. His white count is still elevated from the blood infection, but the spinal tap has come back clear so far. He will need the antibiotics for at least 7 to 10 more days. When he goes home he will be on heart meds and will see a cardiologist on sept 1! He is beautiful and trying so hard to get better. Mic got released today so she and josh will be in limbo for a while. Thank u for the prayers. We love u all! 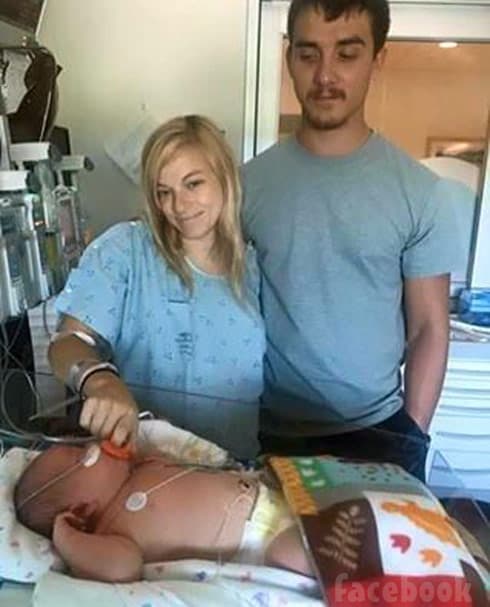 In addition to the stress over Broncs’ health, the ordeal has also been frustrating because he cannot be held. “They won’t allow us to rub him or have any loud noises in his room,” Angie revealed yesterday, adding that precaution is because doctors “don’t want his heart racing.”

Here is a photo of Angie looking over her grandson Broncs: 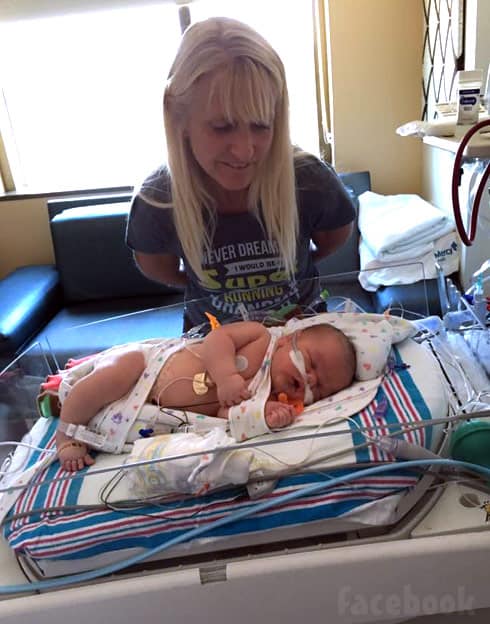 Baby Broncs update: he is still on oxygen to regulate his breathing and an IV in his navel to regulate his blood sugars. He can’t be fed until he’s off the oxygen and he can’t be held until he gets the IV out of his navel. He is on meds for his heart rate and his blood pressure. He looks like a giant in the NICU since he weighs 10 pounds. We appreciate your prayers. God is good and He is in control!

The very social media-friendly Mackenzie has been essentially quiet since having her C-section on Monday, but she did share this tweet as an update and an explanation for why she hasn’t been able to post more:

Thank you all for you love and prayers. God has control. I have been resting and pretty drugged so keeping everyone updated is a challenge

I’d like to thank Angie for keeping everyone updated. Our thoughts are still with Mackenzie and the rest of her family, and we hope that little Broncs is able to go home soon. Life is always a little harder for those with big hearts, right? #GetWellSoonBroncs