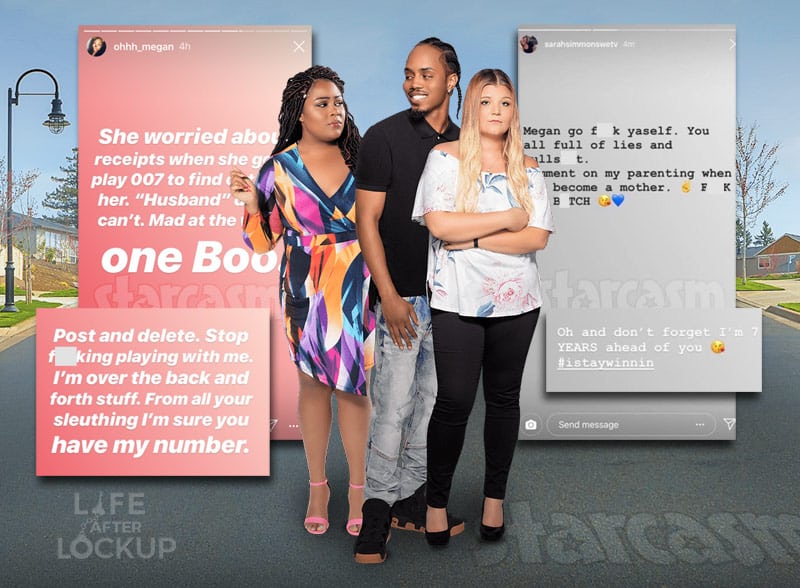 On the current season of Love After Lockup: Life After Lockup, all three members of the infamous Megan, Sarah, and Michael love triangle are having trouble seeing eye to eye to eye in the wake of Megan and Sarah’s bitter Twitter feud late last year. Well, it seems that the airing of their former social media dirty laundry has reignited the animosity between Michael’s prison sister wives as they are currently going back and forth on Instagram!

There was quite a bit of tweetin’ ‘n’ deletin’, so we don’t have the full picture. It seems Megan mentioned that she had spoken with Michael and Sarah’s daughter via FaceTime, and that got Sarah feelin’ some kinda way. (I’m doing my best to change up my accent like Sarah does. Just try to imagine a font with braids.)

“The only thing I ever mentioned about her daughter in the meeting with Sarah is that I spoke with her on Facetime,” Megan wrote in her Instagram story. “Never anything negative.”

Sarah apparently mentioned that she had receipts in the form of text messages from Megan. Megan was unbothered.

“B*tch post them!!!!” Mega wrote in another Instagram story post. “All it’s gonna show is how much I loved a ni**a. Don’t lie and say I spoke bad about your daughter when you have me blocked hoe. Tag me sis.”

Megan continues, but is no longer speaking directly to Sarah:

She worried about receipts when she gotta play 007 to find out what her “husband” does. I can’t. Mad at the wrong one Boo.

I’ve been quiet, but honestly this sh*t turning me to the old me and IDGAF. That’s what y’all want anyway.

Back to speaking directly to Sarah:

Post and delete. Stop f***ing playing with me. I’m over the back and forth stuff. From all your sleuthing I’m sure you have my number.

Everything I’ve done I stand on. But I’ll never let a hoe lie on me. Take that as y’all will. Good night.

I really don’t want to choose sides here, but it seems pretty obvious that Michael is a hoe, and Megan DAMN sure let that hoe lie on her — in more ways than one! I’m just sayin’ what y’all wanna hear anyway.

I’m not sure of the timeline, but at some point Sarah shared a couple messages on her Instagram story that were screen capped before they disappeared.

“Megan go f**k yaself,” Sarah wrote hoodily. “You all full of lies and bullsh*t. Comment on my parenting when you become a mother.” Sarah signed off with: “✌️ F**K YOU B*TCH ??”

A few minutes later, Sarah returned to remind Megan that she’s been with Michael much longer, and that being a single mother of two children by a cheating convicted felon counts as a big “W” where she’s from. “Oh and don’t forget I’m 7 YEARS ahead of you ?,” Sarah wrote. She added the hash tag #istaywinnin

I think we can all agree that the Pythagorean theorem does not apply here because this love triangle is definitely not right. But, all these messy angles make for some damned entertaining reality TV, and I’m here for it!

Speaking of that, are we EVER going to find out what Megan’s big secret is?!

Who else is dying to know what @ohhh_megan's secret is?! Is she pregnant? Is she seeing someone else? Was she really not a virgin? I can't wait another week! #LoveAfterLockup #LifeAfterLockup

To find out what the secret is, be sure to keep tuning in to new episodes of Love After Lockup: Life After Lockup airing Friday nights at 9/8c on WE tv!