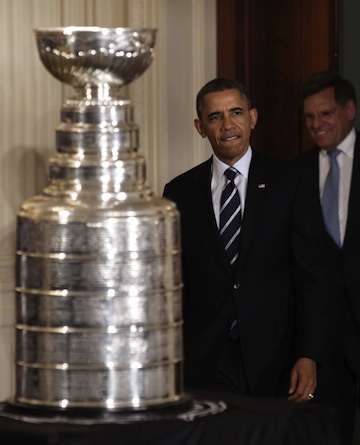 Also kind of a big deal.

The Honorable Eric Garcetti, mayor of Los Angeles, decided to celebrate the LA Kings’ recent Stanley Cup victory in a big way during the official celebration on Monday.

Before a crowd of 19,000, Garcetti acknowledged the momentous occasion and hinted at the firestorm to be brought on by what he was about to do:

“There are two rules in politics. They say never ever be pictured with a drink in your hand. And never ever swear….But this is a big (expletive) day. Way to go, guys.”

Later that afternoon, the mayor’s office doubled down on Garcetti’s statement, repeating it in a Tweet with the hashtag #BFD:

“There are a few rules in politics, one is never swear, but this is a #BFD” –@ericgarcetti welcomes the #StanleyCup to LA

Of course, Garcetti is only the most recent politician to drop the big F in public to underscore a point. Vice President Joe Biden used the famous phrasing in 2010, at the signing ceremony for the Affordable Health Care Act. And then-Vice President Dick Cheney launched an effer at Senator Patrick Leahy during a discussion about Halliburton in 2004.

What do you think, guys? Is this another example of public discourse going down the toilet tubes, or nothing more than one man assuring us it’s OK for the good times to roll?