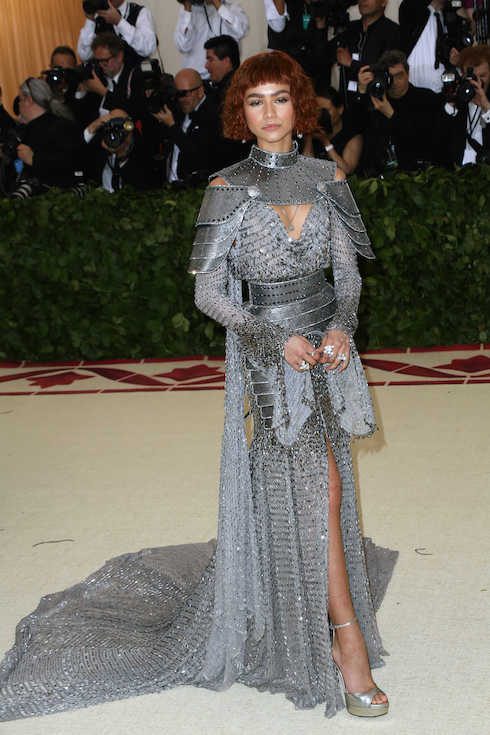 LAINEY GOSSIP – The award for best interpretation of the Met Gala theme should probably go to Zendaya, who took “Heavenly Bodies” both literally and figuratively and went dressed as Joan of Arc

CELEBITCHY – Scarlett Johansson is getting dragged pretty thoroughly for wearing a Marchesa bridesmaid’s dress to the Met Gala. Among the people grateful for her choice: both Kylie and Kris Jenner, who ignored the theme completely and looked way worse

DLISTED – Sanaa Lathan would like you to know that she is not the still-mystery celebrity who allegedly bit Beyonce’s face at a party a few months ago. She also blames social media for the story blowing up, which at this point is honestly one of the most grandparent-y things a person can say (other than “Put a post-it on whatever you want me to leave you”)

JEZEBEL – Roman Polanski, who raped a child 41 years ago and was kicked out of the Academy of Motion Picture Arts and Sciences for it last week, is now threatening to sue the Academy for failing to give “reasonable notice of the charges against him.” I know I’m not alone in hoping the Academy takes him up on his demand for “a fair hearing to present his position” on why raping a minor and then fleeing the country to avoid criminal charges shouldn’t get him the boot from this organization

REALITY TEA – Countess Luann says the reason she was able to move on fight-free after coming face-to-face with both Missy and Carole Radziwill on RHONY is because she’s “not a grudge holder.” That’s a funny way to pronounce “On parole and thus my best behavior”

THE BLEMISH – Hot take: “This Year’s Met Gala May Be The Dumbest Yet!”

VOX – Don Blankenship, the race-baiting felon whose negligence as a coal company CEO led to the death of 29 miners, lost the Republican primary for a Senate seat by coming in…a strong third. Congratulations, West Virginians, on sort of rejecting him

VIDEO What is TLC’s new series Sex In Public?