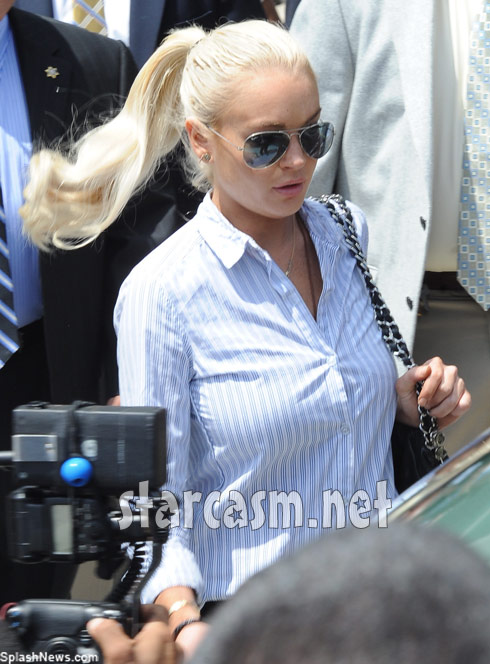 Lindsay TefLohan had to make a little trip from her current house arrest down to the courthouse because she failed an alcohol test. She walked away from said appearance to head right back home but now girl can drink whenever she wants.

WHAT!?! I know, I mean how does the starlet keep getting away with all this celebrity justice? Well for this particular situation it was all based on what could be seen as an oversight by her previous judge. The presiding judge today, Stephanie Sautner, ruled that LiLo’s old judge, Eldon Fox, only demanded testing for controlled substances – not alcohol. Whoops!

Because of this Sautner’s hands were tied in how strict she could be with the troubled actress who has been photographed partying during house arrest. Lohan has even filmed a commercial for an auction site which you can check out here. Interestingly enough, her probation officer can no longer test her for alcohol or drugs because there is no court order to do so. Party on for Lindsay!

The judge has limited visitors to one at a time and has forbid any more parties at her residence (poor thing). The best verbal scorn the judge could muster was to tell Lindsay she’s guilty of “extremely poor judgment.”

No jail, can’t party with a group but can sure get her drank and whatever else on now during some special one-on-one time. I think she’s even better off. Incredible!