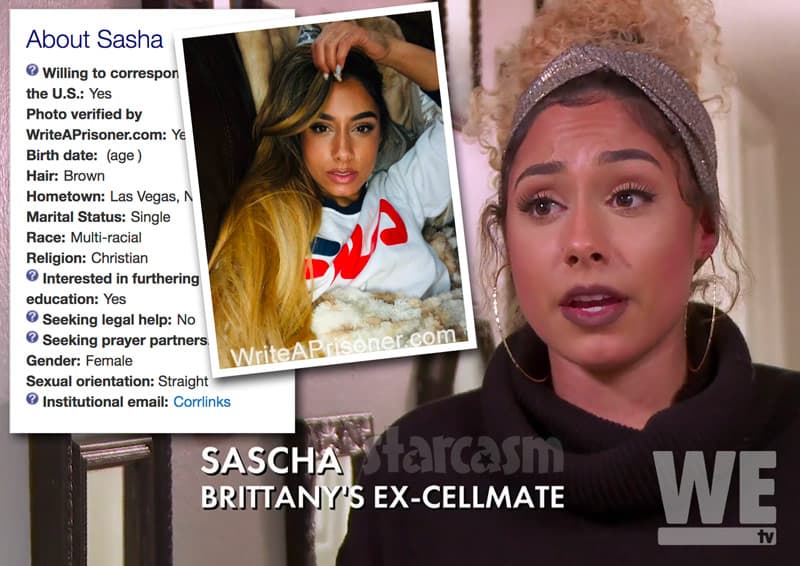 On the series premier of Love After Lockup: Life After Lockup, Brittany Santiago’s best friend Sascha Williams opens up about her pending sentencing and gets very emotional as she reveals her hopes and dreams to Brittany and Amanda. “Ultimately, I want a family,” she tells Brittany. “I want to be married. I want kids. I want what you have, you know, like, so special.”

“You’ll have that one day, Sasch,” Amanda assures her, “whether it’s, you know, coming soon, or if it’s years from now. Either way, you’re gonna have that.”

It seems Brittany wasn’t bluffing — at least about one of the sites. Sascha (who actually spells her name without the “c”) currently has a profile on WriteAPrisoner.com.

“I am looking for a man who is kind, supportive, non-judgmental, and wants the same things as me,” Sascha begins her intro. “By that, I mean happiness that comes with a long lasting relationship. I want a best friend and a partner.”

Despite the fact that she lists her earliest release date as July 1, 2022, Sascha seems a little impatient. “I know what I want and I am ready to settle down. If you think this may be you, then hurry, let’s see where this may lead.”

I should point out that the Nevada Department of Corrections lists Sascha’s parole eligibility date as February 23, 2025. In case you missed our previous post. ***SPOILER*** Sascha was sentenced to 10-36 years in April after pleading guilty to four felonies stemming from a botched home invasion in 2013 that left two people dead and another injured. She was credited at the time with 1,499 days already served — which equates to just over four years.

For those of you wanting to contact Sascha, she provides instructions on just how to do that. “You can email me at corrlinks.com but please give me an address to write to you or a phone number to call you because I can not e-mail you back.” She concludes her intro with: “I hope to hear from you soon. Xoxoxo”

Her profile also includes an address to mail letters:

Something tells me Sascha’s inbox is about to be flooded! And y’all better not be treating her inbox like the internet — if you write her, be nice!

Sascha’s sentencing will be featured on Life After Lockup this season, so be sure to tune in for new episodes airing Friday nights at 9/8c on WE tv.

If you’re curious about how Sascha and Brittany’s gal pal Amanda is doing, the news is a little bit more positive.