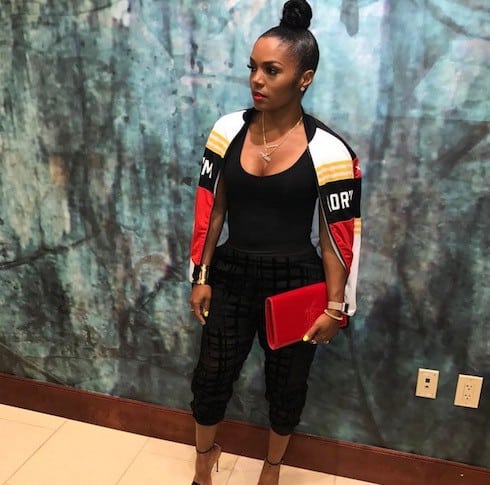 It’s actually been somewhat quiet on the Kirk Frost baby mama front of late. The flurry of rumors and allegations in the lead-up to Love & Hip Hop Atlanta Season 6 included the possibility that Kirk a) had a baby named Kannon with Jasmine Washington (so far borne out by the show); b) that Kirk Frost also had a second baby with a different woman last year (jury’s still out); and c) that Kirk possibly had three different girlfriends in addition to two baby mamas in 2016 alone (also still unconfirmed, probably because no one would believe it anyway).

But over the past few weeks, things had actually been quiet. And, after Kirk and Rasheeda stepped out together for the first time since the baby mama allegations broke–for a paid appearance, true, though they also traveled together, and sometimes every scrap’s a feast–it looked like they might actually be sticking together. However, that gossip has since been flipped on its head, and the dominant question is now “Did Rasheeda actually leave Kirk?”

For one thing, Rasheeda recently published a surprising blog post over at People magazine, one in which she blamed her and Kirk’s rocky marriage in part on postpartum depression. Rasheeda revealed that “something wasn’t exactly normal” after coming home with Karter, and that the heavy fog in which she found herself left Kirk “confused and feeling alone”:

My mind was cloudy. I was tired. I felt down and lost, and would cry all the time. It came to a point that I would retreat away from my family and avoid my friends. As a woman, I was trying to cope and be a great mom and wife. I didn’t look or feel my best. I was over 200 pounds and there were days I would tell Kirk, “Listen, you need to take care of Karter,” and I would just lie around. I was in such a weird space and he didn’t understand what was going on with me.

Rasheeda goes on to explain that receiving an actual diagnosis–even if the diagnosis was that she had postpartum depression–brought her tremendous relief, since now her problem had a name and an explanation. Thanks to Kirk and her mother, both of whom “immediately stepped in” to continue caring for Karter, Rasheeda was able to begin recovery using “natural remedies,” such as a daily routine, diet, exercise, and simply “being outside.”

So, from that interestingly timed blog post, it sounds like Rasheeda is still with Kirk. But it’s also worth pointing out that the latest Love & Hip Hop Atlanta sneak from VH1 features Rasheeda dropping the D-word in reference to her cheating husband. She also just wants to “disappear,” which is perfectly understandable:

The through-line with both developments is the children Rasheeda shares with Kirk. Though for now it looks like she decided to stand with him, it’s entirely possible that she’ll decide the best thing for Karter and Ky is to grow up in a more stable household–even if there’s only one parent at the head of it.