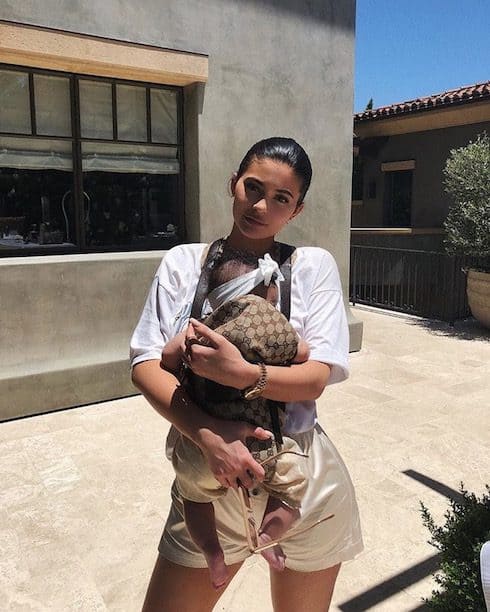 At this point, it kind of seems like Kylie Jenner is trolling all of us into submission with her extraordinary wealth. The 20-year-old first-time mom — who’s still on track to become a billionaire by her 21st birthday — hardly raised eyebrows when news broke of the pregnancy Ferrari she bought herself following Stormi’s birth.

The same is true of her alleged plans for a $10 million wedding to baby daddy Travis Scott (to whom it’s looking more and more like she’s already engaged). And the general reaction was no different when Kylie Jenner’s baby carrier made its social media debut this weekend, as she toted Stormi to cousins North and Penelope’s joint birthday party in Gucci style.

The photo — you can see it in all its glory at the top of the article above — has led to a general stampede for Kylie’s carrier of choice. As we’re about to explain, though, it’s become a tough get. Per W Magazine, you could until this afternoon find Kylie Jenner’s baby carrier here, at The Real Real (their motto is “Authenticated Luxury Consignment”) for a cool $625.

And here’s a description of the carrier itself:

According to TRR, the carrier goes for $820 on Gucci’s site; curiously, though, Gucci doesn’t appear to sell it anymore. (Though we’re sure, thanks to Kylie’s influence, that that will soon change.)

In addition, People was quick to point out that the Gucci GG Baby Carrier has completely sold out at Neiman Marcus since it made its big debut as Kylie Jenner’s baby carrier.

Again, though: this is hardly a surprise for the woman who almost singlehandedly killed Snapchat. Kylie has 109 million Instagram followers. In 2018 Earth terms, that’s at least a couple of Infinity Stones’ worth of power. Sparking a craze for an $820 baby sack is no feat at all.

And even the question itself — How much does Kylie Jenner’s baby carrier cost? — is inaccurate, since it presumes Kylie paid *anything* for the item in the first place. There’s no way she didn’t get it for free upon Stormi’s birth, either direct from Gucci itself or from Kris or one of her sisters, who in turn got it from Gucci specifically so they could put it in Kylie’s hands and one day hit Instagram paydirt. Kylie definitely has the Reality Gem; after that, anything else is gravy.

PHOTO Kylie Jenner hints at a reconciliation with Tyga