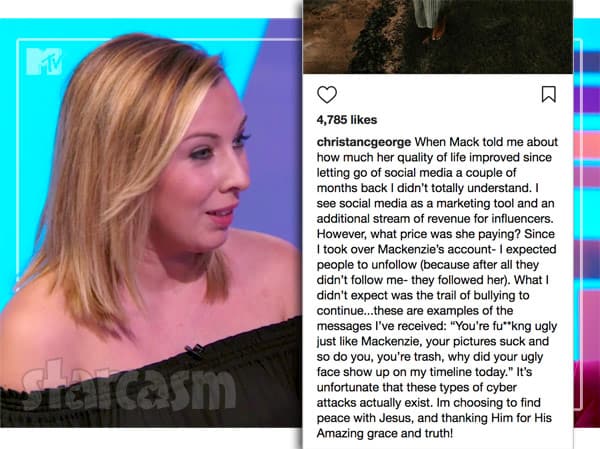 Teen Mom OG dad Ryan Edwards’ pregnant wife Mackenzie Edwards handed over the reins to her Instagram account to her photographer and new bestie Christan George last month, and it seems a large regiment of the Mackenzie hater army have simply moved on from bashing Mackenzie to bashing Christan. Christan shared her story of cyber bullying transference in a lengthy caption to a brand new photo from Mackenzie’s recent maternity shoot showing off her growing baby bump in a loose-fitting dress:

“When Mack told me about how much her quality of life improved since letting go of social media a couple of months back I didn’t totally understand,” Christan begins. “I see social media as a marketing tool and an additional stream of revenue for influencers. However, what price was she paying?”

Christan admits that she anticipated a lot of people who followed Mackenzie’s account to unfollow once she took over, but she was blissfully unaware of how contagious the toxicity was. “What I didn’t expect was the trail of bullying to continue,” she says, before sharing some examples of messages she has received since taking over the Instagram account: “You’re f**king ugly just like Mackenzie, your pictures suck and so do you, you’re trash, why did your ugly face show up on my timeline today.”

“It’s unfortunate that these types of cyber attacks actually exist,” Christan says, before revealing how she is dealing with it all. “I’m choosing to find peace with Jesus, and thanking Him for His Amazing grace and truth!”

It appears as though Mackenzie’s old Instagram account has lost nearly 20% of it’s following since Christan’s takeover, dropping from roughly 250,000 to just over 200,000. It’s unclear what the ratio of haters to fans are for those who left and those who stuck around.

Christan previously shared other photos of Mackenzie from a separate maternity shoot in which Mackenzie wearing a bikini and hanging out on an inflatable swan on a lake. The photos (example above) really look great, as does Mackenzie, so I hope the bully barrage doesn’t prevent Christan from posting more pictures. We will keep an eye out!