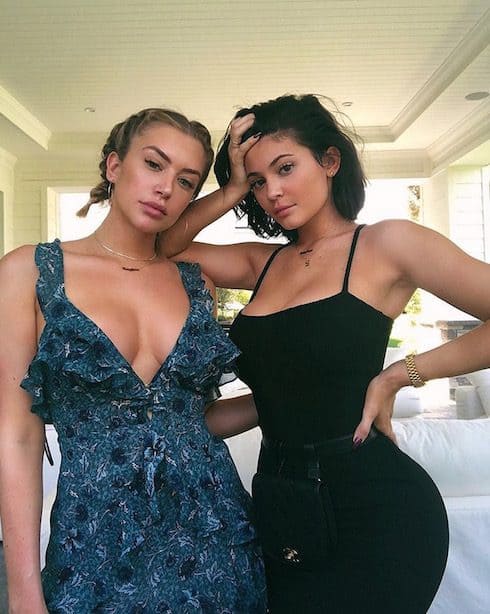 If you’ve seen a new photo of Kylie Jenner over the past few days, you’ve probably noticed that something is…off. It’s not just your eyes playing tricks on you; Kylie Jenner looks weird, now. The most (in)famous set of lips in the world is back to normal.

The pout first surfaced in a shot Kylie shared on Instagram earlier this week — the one at the top of the article above — alongside fellow influencer and longtime friend Anastasia Karanikolaou. The photo, captioned “heat wave,” made no mention of Kylie Jenner’s lips. But When one commenter wrote “She looks like the old Kylie here idk why,” Kylie herself wrote back, saying “I got rid of all my filler.”

Kylie also shared a second pic of herself and Anastasia, one in which she’s pouting as if to hammer home the point:

So, if you took the Kylie Jenner lip challenge a few summers ago, the egg (and residual scars) is all over your face once more. But why did Kylie deflate her lips? The 20-year-old billionaire-in-training has yet to say anything more on the topic; right now, your guess is as good as anyone else’s.

As plenty of observers have pointed out, though, getting lip fillers is hardly the kind of invasive surgical procedure for which Kylie has long been known. And having them removed is a cinch — you just get a second injection to dissolve the material from the first one. Via Jezebel:

If you have had lip injections with Restylane, Juvederm, or Perlane which are hyaluronic acid fillers no surgery is required and an enzyme called hyaluronidase can be injected to dissolve the material away in 24 to 48 hours.

And what does this mean for Kylie’s brand? Yes, she has more than enough cash, paper value, and cultural momentum to start fading away by choice right now, but that doesn’t seem like her style at all. And honestly, it *is* weird to see Kylie with “normal” lips in 2018, just like it was weird and a little disturbing to see her old face Photoshopped onto her new body in 2017. Kylie has been more machine than man for longer than she’s been legal. It’s therefore unnatural for her to try and revert to human form — like a grandmother walking around after dinner without her wig on — before our innocent eyes are ready.

Kylie Jenner plans her own reality show with Tyga: Would you watch?