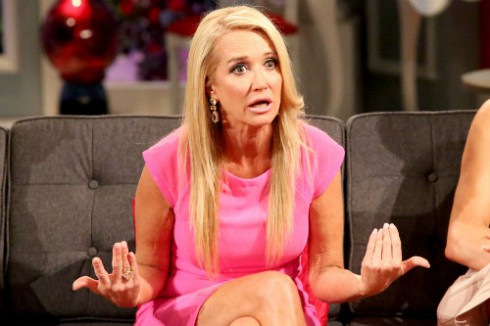 Kim Richards is back in rehab. The troubled Real Housewives of Beverly Hills star checked herself into a facility in the wake of a booze-fueled meltdown at her daughter’s Mexican wedding over Memorial Day weekend.

According to E!, Kim Richards has been in the facility for a few days, and her health is already improved. “She’s doing ok, a lot better than she had been,” says their source.

Additionally, this facility is different from the one Kim checked into back in April, when she faced jail time for public intoxication, resisting arrest, and assaulting a police officer. (Though E! didn’t specify, other sources have stated that this facility is “stricter.”) During the Dr. Phil interview that came in the wake of that arrest, Kim swore through tears she was a different person, and that she was trying to change:

I’m a very strong person and I have been sober. I haven’t been working a program. Living through a season on a show, sometimes it’s hard to just get through it. The fans are really hard on me.

Following the most recent meltdown, Kim’s daughter Brooke refused to speak to her. Attendees at Brooks’ wedding said it was clear from her behavior that Kim was either drunk or high on something, although she never ingested anything in public.

Despite going to rehab in April–and, now going back a second time–Kim still faces a prison sentence of two or more years from the April charges.

Does Brandi Glanville have a drinking problem? Reportedly refused intervention