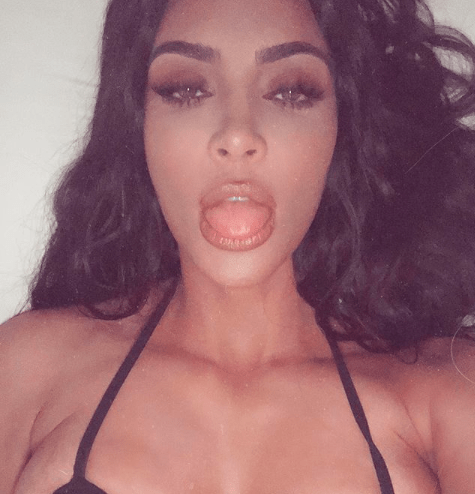 Kim Kardashian has built a massive empire on her personally sculpted face and body – both through working out and plastic surgery, and the search for her idea of perfection has only intensified in recent years for the 37-year-old.

Although she claims to have a “modest soul,” Kim has been bragging about her 24 inch waist and 116 pound weight recently. She even went so far as to post an Instagram story of her sisters Kendall and Khloe praising her for her small frame. When Kendall said she was worried and looked like she doesn’t eat, Kim emphatically thanked her. She also had a lot of hype and gratitude over Khloe’s remark that her waist looked “anorexic” and her arms were “pin thin.”

Of course, this set off the Internet because Kim was minimizing the real horrors and pain of eating disorders and even promoting them with her clip. She’s since apologized for her “incentive” social media boasting but there’s still a larger issue at hand with Kim’s obsession with looks and beauty – both in herself AND other people. Her ex brother-in-law Scott Disick has admitted to her mom Kris that he’s afraid to look Kim in the face because she’s constantly scowling and looking for flaws in the appearances of others.

“It’s scary, right?” Kris agrees in a preview clip for Keeping Up With the Kardashians. “She’ll stare at us.”

“[She’ll say] ‘Is that a pimple right there? And I’m like, ‘I-I-I don’t know,’” Scott says about his scary encounters with his children’s aunt.

In this clip Scott also advises Kris that it might be offensive to offer her friend a facelift as a gift because it implies that she thinks her friend’s appearance isn’t great. It looks like Scott is a little more tapped into to the experience and emotions of people who aren’t caught up in the Kardashian bubble.

Kanye, however, is very much deep in. Of course it’s hard to keep up with everything controversial that Kanyes says, but a few days ago he related to The Fader his belief that plastic surgery can take a woman’s “pu**y count . . . back to zero.”

Kourtney and Scott back together again, again