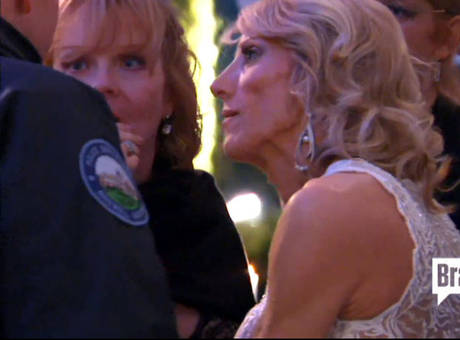 Kim hasn’t spoken with her parents since she kicked her mom out of her wedding when her mom Karen sued Kim for visitation rights to see Kim’s daughters. Kim’s publicist also got notice that Karen was shopping a tell-all book that including details about Kim’s alleged stripper past. Kim has been accused of being a stripper before by former cast-member Nene Leakes, but denies that she was ever anything but a waitress at a strip club.

When Kim filed a gag order against her mom December 2012, she claimed that her mom was about to sign $50,000 book deal, but there’s been no further information shared about Karen’s possible book plans. On the show she says her mom is just trying to seek money and fame, and that all she’s ever worried about was the “almighty dollar.”

If Karen does publish a book, she should take special care to make sure everything she prints is true because her daughter talked with her lawyer on camera about filing a defamation suit if anything is untrue.

While these difficult mother-daughter episodes were airing, Kim tweeted “My girls are so strong and I’m so thankful for the relationship I have with them!! There don’t know it but they r my strength!!”

Kim’s dad has also gotten in on the feud, calling Kim a “pathological liar” last November. Last fall Kim also accused her mother of committing perjury by allegedly falsely saying she is indigent in her court pleadings.

Would you read Karen Zolciak’s book if it ever gets published? Should a mother ever write a tell-all about a child?