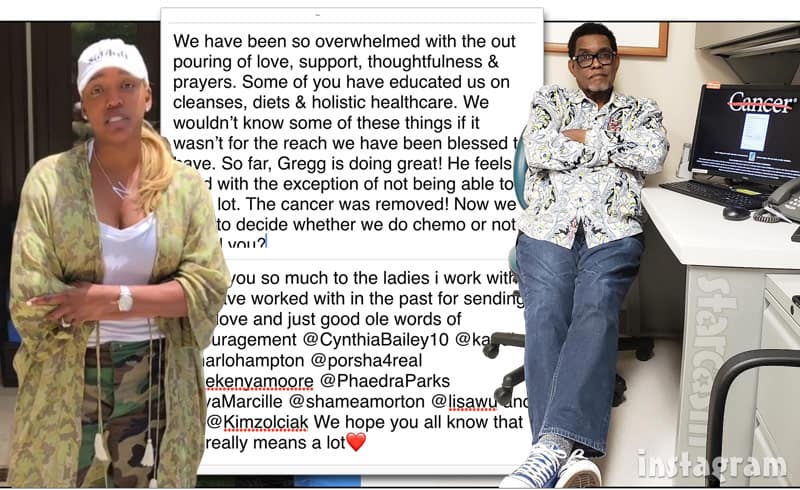 The Real Housewives of Atlanta‘s NeNe Leakes revealed on Wednesday that her husband Gregg Leakes has been battling cancer, and she returned to Instagram on Thursday to provide a very positive update on how he is doing.

“So far, Gregg is doing great!” NeNe wrote in an Instagram text graphic. “He feels good with the exception of not being able to eat a lot,” she adds.

NeNe adds some more good news and an update on what is next for Gregg’s treatment: “The cancer was removed! Now we have to decide whether we do chemo or not? Would you?”

In addition to the update, NeNe also shared her appreciation to all of those who have responded to her announcement of Gregg’s cancer diagnosis. “We have been so overwhelmed with the out pouring of love, support, thoughtfulness & prayers,” NeNe writes. “Some of you have educated us on cleanses, diets & holistic healthcare. We wouldn’t know some of these things if it wasn’t for the reach we have been blessed to have.”

NeNe also thanked some of her current and former RHOA co-stars by name — including on-again, off-again arch nemesis Kim Zolciak-Biermann. “Thank you so much to the ladies i work with and have worked with in the past for sending gifts, love and just good ole words of encouragement @CynthiaBailey10 @kandi @marlohampton @porsha4real @thekenyamoore @PhaedraParks @EvaMarcille @shameamorton @lisawu and yes @Kimzolciak We hope you all know that this really means a lot.”

In case you missed it, NeNe originaly broke the news of Gregg’s cancer diagnosis with an Instagram photo featuring Gregg at a MD Anderson Cancer Network location (presumably Piedmont Cancer near Atlanta) leaning in a chair in front of a computer screen with the MD Anderson Cancer Center’s trademark logo of the word cancer with a red stripe through it: 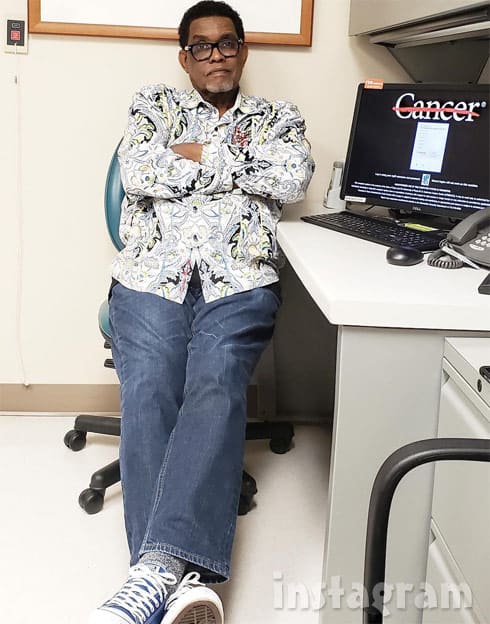 “Our New Normal and the fight begins,” NeNe captioned the picture, adding this string of emoji and hash tags: ?? #f*ckcancer???????? #mdandersoncancercenter #yougotthis #iloveyou

The diagnosis comes after Gregg spent more than two weeks in the hospital last month. NeNe shared those details along with an announcement that she was canceling some of her tour dates to spend time with Gregg. “Today marks the 15th day straight that Gregg has been in the hospital,” NeNe stated on May 21. “I find it very difficult to stand onstage and laugh and have a good time and give you guys your money’s worth knowing that my husband is in the hospital not feeling well. He has said to me over and over again, ‘Go on. Go out there. Have a good time. Do the show. I’m gonna be fine.’ But I find it mentally very hard for me to do.”

After 16days my hubby, my rock, my best friend @greggleakes returns to the Leakes household! This has been really hard on us, our children, family and closet friends. He has a long road ahead but God is good and life is precious! WON’T HE DO IT? Come on somebodyyyyyy?? #lifeoftheleakes

Gregg is on the move??

We join almost everyone on the planet in wishing Gregg Leakes a speedy recovery!

If you’d like to help out with more than thoughts and prayers, although NeNe clearly states that Gregg “needs NOTHING,” she has provided an address ou can send things to:

Greggroad2recovery@gmail.com if your sending something (although the needs NOTHING) send to: 6555 Sugarloaf Pkwy #307-235 Duluth Ga 30097 NO FOOD, NO FLOWERS pic.twitter.com/VIYrNYXjkN