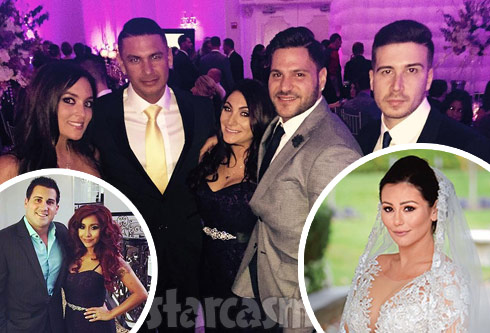 First off, here’s a photo of JWoww in her wedding dress, a beautiful white lace gown that the bride helped design along with Stephen Yearick for Ysa Makino from Castle Couture:

“So happy to share some of my wedding Photos with you in @intouchweekly!!!” her Instagram caption reads. “Looking at this picture makes me cry all over again… My dress was flawless! Thank you again @stephenyearick and @castlecouture for creating a perfect dress for me!
Thank you for taking this photo @mtcphotography.”

JWoww shared the photo, which appears with numerous other JWoww wedding photos in the new issue of In Touch, on her website and reminded everyone that it wasn’t the only wedding dress she wore on Sunday! “I wore two custom dresses on my wedding day,” she wirtes, “one for the ceremony and one for the reception, and this one is my ceremony dress.”

The expectant newlywed (YES! JWoww is pregnant again!) then gets a bit emotional. “Looking at this picture makes me cry all over again…” she writes. “My dress was flawless! It had a 10-foot train and it was everything I wanted and dreamed of. I wanted my dress to feel like it was from the Victorian era! I wanted it to be super glamorous so that I would feel like a princess walking down the aisle! Mission accomplished, this was my perfect dress!”

Here is another photo from the new issue of In Touch which includes JWoww, husband Roger, and the entire wedding party — which is HUGE!!!

And here is a photo of just the bridesmaids (minus Sammi): 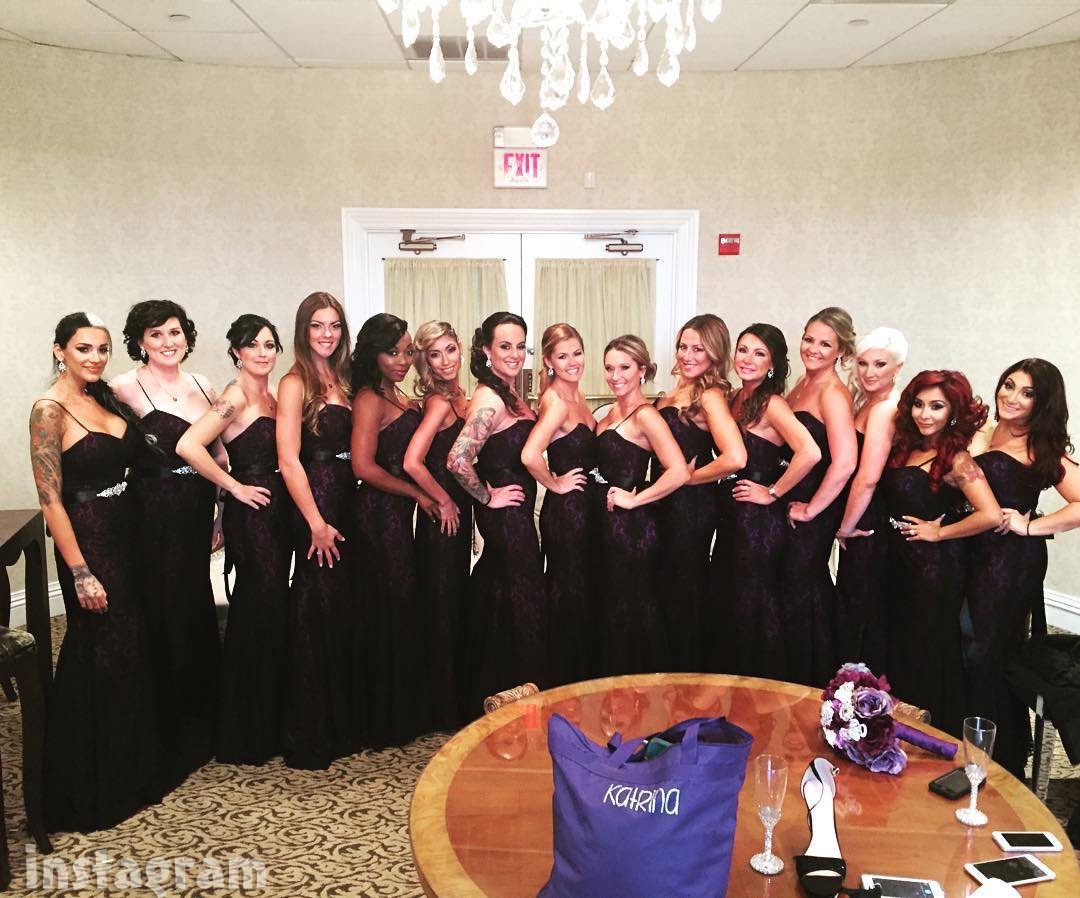 As far as JWoww’s Jersey Shore co-stars, they were all in attendance except for Mike “The Situation” Sorrentino. Check out this amazing photo of (from left to right) Sammi “Sweetheart” Giancola, DJ Pauly D, Deena Cortese, Ronnie Magro, and Vinny Guadagnino: 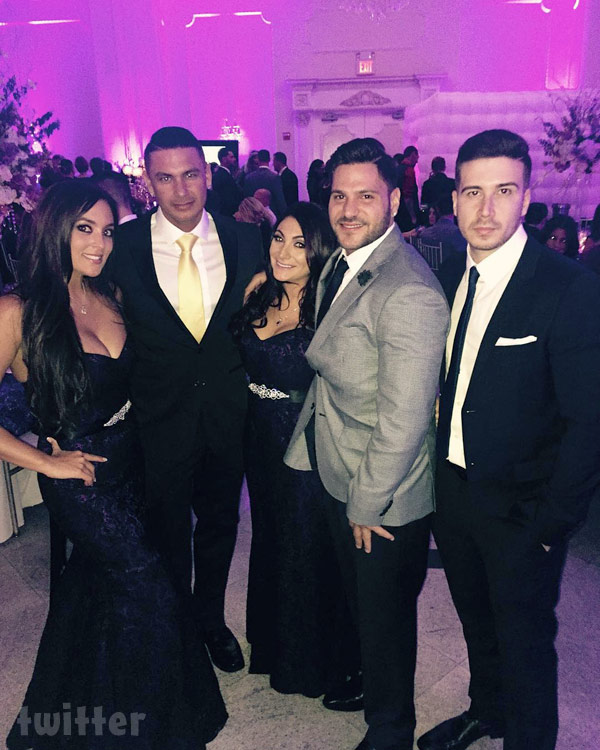 Here are some more pics tweeted as a collage by Deena, which also includes Snooki:

J was off doing bride duties

And here are just the boys:

OK, I’m going to just step out of the way and star an embedding marathon. Get your scrolling fingers ready!!!

I Always Cry At Weddings ….

A perfect night w our Jersey family celebrating the most beautiful bride EVER! #WowwWedding #jenniandroger pic.twitter.com/N6oX0jOLOY

I was obsessed with my bridesmaid dress!!!

Brother from another mother

About last night…. Lol….woke up this am with my bridesmaid tracksuit on … On top of all my covers …. Last night was fun … Although it ended really early had a BLAST yesterday and last night

A photo posted by Abbeymacdonald (@abbeymacsofhousesnark) on Oct 20, 2015 at 9:54am PDT

Christopher and I at the #wowwwedding

@DJPaulyD if only I were 30 years younger, sooo cute #wowwwedding but I need to break up with @RogerMathewsNJ first pic.twitter.com/FdS6G8V7NQ

Slightly OT but another quip from the past I'm thinking about: when I was like 11, this miserable bitch lunch monitor @ school asked me why I was sitting with all the girls- she like shamed me. I wish I could go back in time & tell her "because I'm fucking cool, that's why!" #itgetsbetter #bridesmaids #bridesman #wowwwedding

@snookinic @jlavalle5 u guys r such a good couple hope u guys notice my account!!! Nicole I am just saying I never post like this I only post two pics a day but since it's Jennis wedding I am posting a tone anything I could get my hands on!!! love u so much u mean so much to me hope u love my page u following me would mean so much to be and I will start crying if u do lol love u always!!! u and jionni r such a good couple u guys look so freaking stunning tonight!!! I love love love u so much!!! #WowwWedding @jwoww ur wedding is fabulous wish I was there lol!!!

Congratulations again to JWoww and Roger! And not just for their beautiful wedding ceremony, but also on the announcement of their second child on the way!