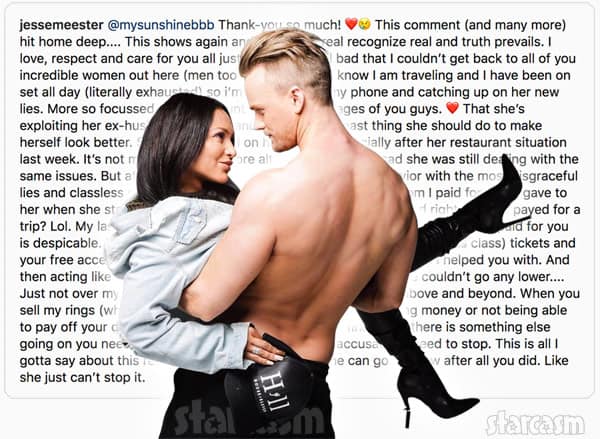 Before the 90 Days #TwinFlame super couple Jesse Meester and Darcey Silva look to be in the midst of their final final break up on the current season, but their dysfunctional and contentious relationship continues on social media.

In a rather lengthy response to an Instagram comment, Jesse attempts to clarify some things about his relationship with Darcey — all while continuing his trademark judgmental concern for her well being.

Jesse references a claim made by Darcey’s sister Stacey on Sunday night’s Before the 90 Days Live After Show that Darcey paid for the couple’s trip to Greece early in their relationship. There is also a reference to an alleged recent “situation” at a restaurant in which Darcey got a little heated and police were reportedly called.

In addition, Jesse states that Darcey is “exploiting her ex-husband” and he responds to Darcey supposedly talking about having sex with Jesse in a hotel room that he paid for?

Also interesting is that Jesse suggests that Darcey has sold his rings (plural) and that she continues to complain “about not having money or not being able to pay off [her] debt when a lot of people help [her] out financially.”

Here is the full interaction:

COMMENT: Trust me I know her ex-husband and you don’t want to be anywhere near these psychotic sisters. They are sick and put hands on each other. I can’t believe they are still lying and talk about you too like their exes before.

Jesse, let me tell you this. The majority of us women here see and feel you. Your heart is pure, full of love, and let me tell you as an older woman, very rare to find these days. Please never change! I pray you will find a real woman who respects and loves you that you deserve. I would have lost it with her but you handled yourself with respect and dignity. She’s a mentally ill person and @tlc should stop exploiting them. Thank you for always speaking truth and love. Even though it’s not easy. We always have your back and love you

JESSE: Thank-you so much! ❤️? This comment (and many more) hit home deep…. This shows again and again that real recognize real and truth prevails. I love, respect and care for you all just as much! I feel bad that I couldn’t get back to all of you incredible women out here (men too btw lol). As you know I am traveling and I have been on set all day (literally exhausted) so i’m just grabbing my phone and catching up on her new lies. More so focussed on the amount of loving messages of you guys. ❤️

That she’s exploiting her ex-husband, now me and others is the least thing she should do to make herself look better. She’s adding fuel on her issues. Especially after her restaurant situation last week. It’s not my problem anymore although I kinda felt sad she was still dealing with the same issues. But after people sent me screenshots of her behavior with the most disgraceful lies and classless statements about that we had sex in a hotel room I paid for, that I gave to her when she started drama. And then say how she was not treated right and she payed for a trip? Lol. My last bit of empathy is gone.

To claim you paid for a trip to Greece I paid for you is despicable. That was a surprise I arranged for her. Oh and the (business class) tickets and your free acces to my company’s guidance and so many more things I helped you with. And then acting like this is a total disgrace! Just when you thought she couldn’t go any lower…. Just not over my back after doing everything for you and going above and beyond. When you sell my rings (which is totally fine) and complaint about not having money or not being able to pay off your debt when a lot of people help you out financially there is something else going on you need to take a closer look at.

Her false accusations need to stop. This is all I gotta say about this really. Pure disgust how someone can go that low after all you did. Like she just can’t stop it.

If you’re curious about what Stacey said in regards to the Greece trip, here are some relevant highlights from the Live After Show hosted by Michelle Collins: 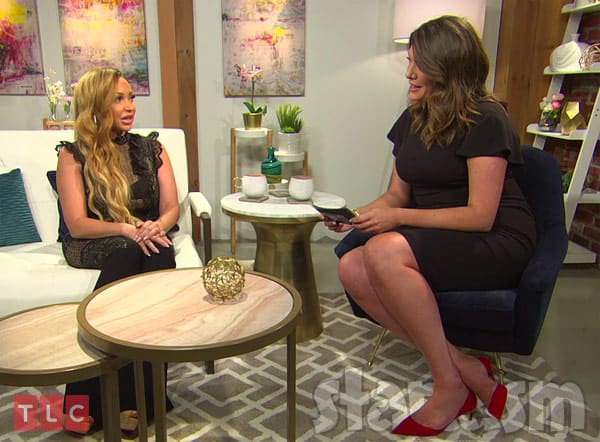 MICHELLE: Did he ever ask her for money or anything like that?

STACEY: I don’t know about if he asked her for money, but I know that she’s paid for pretty much everything. And I know that he’s said some things in the media that he pays for everything, which I know is bullsh*t…My sister paid for many trips and many things.

STACEY [After being asked about whether or not she witnessed Jesse and Darcey having “loving moments”]: I never saw or heard about any loving moments, you know. I mean, they did travel. They went to Disney World with the girls, and that ended up not being a great trip either. And they went to Greece at one point, which she paid for.

So far, Darcey has not responded to Jesse’s claim — but perhaps we will see another 2AM rant later tonight.

Meanwhile, I’m still a little confused by Jesse and Darey’s timeline. The two were together in New York City in September of last year, and that appears to be when they filmed the Before the 90 Days episodes earlier this season, as well as last season’s Tell All. Jesse returned to the US in December, which must have been when Jesse broke things off — and he visited New York City, Washington, DC, and Florida with Darcey and her kids?

Perhaps we will get some clarity on their togetherness timeline in the new episode of Before the 90 Days airing Sunday night at 8/7c on TLC.