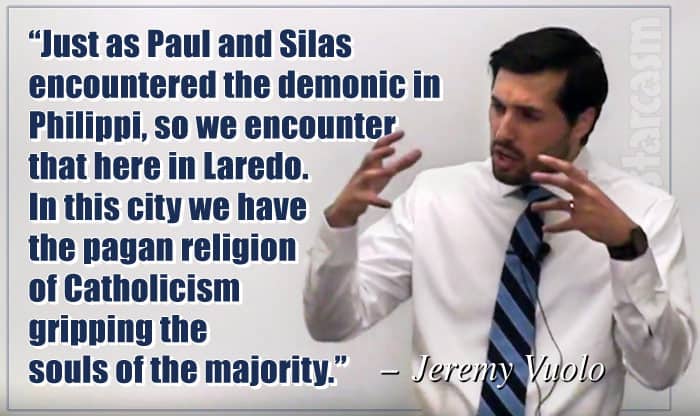 Jinger Duggar Vuolo’s husband Jeremy Vuolo is a pastor at Grace Community Church in Laredo, Texas. In one of his recent sermons, he made his stance on Catholics very clear, describing Catholicism as “demonic” before calling it a “pagan religion” that is “gripping the souls of the majority” in Laredo.

The sermon is titled “Philippians: Human Responsibility in Establishing God’s Church (pt.2)” and it is currently available to watch as a non-embeddable Youtube video. As the title suggests, Jeremy is preaching on Paul and Silas in Acts:16 when he takes a moment to talk about how modern-day Laredo is similar:

I just want to say this, kind of as an aside for us here in Laredo. There are spiritual strongholds in our world today, aren’t there? Just as Paul and Silas encountered the demonic in Phlippi, so we encounter that here in Laredo. In this city we have the pagan religion of Catholicism gripping the souls of the majority.

Later, Jeremy talks about salvation in the different world religions — including Catholicism — and he sums it up this way:

When the question comes, “What must I do to be saved?” Catholicism tells you to clean up your life and adequately perform the sacramental duties.

Islam tells you to follow Islam. Do enough good deeds to outweigh your bad and perhaps Allah will allow you to enter paradise, but even then you can’t be certain. In fact, the only way for you to be certain of paradise is if you die in jihad.

Hinduism, though varying and ever-changing the requirements, they teach salvation through bathing in a sacred river, or uttering mantras or prayers.

All of these, and the thousands of other religions and the sects that come out of and veer off the major world religions demand salvation from within yourself. But that leaves us despairing and lost — sinking in the deadly pit of our own depravity. The message of the Christian is that of grace — ill-deserved favor from the hand of God to a wretched, depraved sinner. And that is the foundation upon which the church is built.

The Duggar family’s church has been criticized for its views on Catholicism as well, and Jill and Derrick Dillard have taken quite a bit of heat for their mission trips to Central America, including their most recent stints in El Salvador. The country is currently 85% Christian, but that breaks down further to 54% Catholic and 31% Protestant. (By comparison, the Duggars’ home state of Arkansas is 56% Christian — with only 4.3% of the overall population identifying as Catholic.)

Critics accused the couple and their fellow missionaries of focusing on the conversion of Catholics over more practical goals such as better housing, water, and education. Derick responded to the accusations in a blog post titled “God Has Called Us…” back in November of 2015: 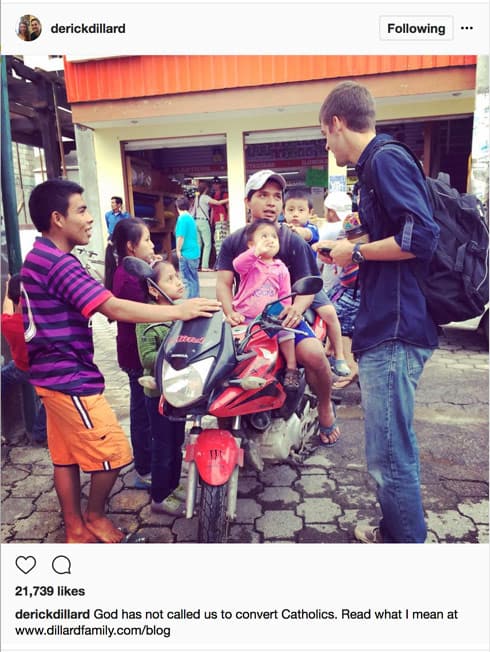 God did not call us to convert Catholics, but God has called us to follow His example. He has not called us to convert Buddhists, Muslims, Baptists, atheists, Mormons, Lutherans, Jehovah’s Witnesses, Methodists, agnostics, or Hindus. God has called us to Central America to preach the good news of the kingdom of God. My desire is to preach good news to the poor and to proclaim liberty to the captives. I have the greatest treasure in Christ, and I want others to know that hope as well.

Jesus Christ’s great commission to the church to make disciples of himself, is a commission to all those who put their faith in him. This is the call God has predestined for all of his saints, whether they follow Him to a foreign land or not, whether they are students, doctors, stay-at-home moms, lawyers, pastors, accountants, teachers, missionaries, engineers, businessmen, politicians, waiters/waitresses, etc…. As was Paul’s ambition in Philippians 3:14, let us also “…press on toward the goal for the prize of the upward call of God in Christ Jesus.” Look to Jesus and be changed this week.

I have nothing against individuals who are Catholic. I know a lot of Catholics who are great people. What I DO have a problem with is the teaching that man can merit God’s favor through his own works or the works of other fallen men. Ephesians 2:8-9 is very clear “For by grace are you saved through faith; and that not of yourselves: it is the gift of God: Not of works, lest any man should boast.”

I DO have a problem with the teaching that man can come to God through Mary or any other person besides Jesus. John 14:6: “Jesus saith unto him, I am the way, the truth, and the life: no man cometh unto the Father, but by me.”

I DO have a problem with the deification of Mary as a sinless being. Mary herself admitted her need for a Savior. (Luke 1:47). If she had no sin, she would need no Savior.

My conscience is captive to the word of God. Where my Catholic friends adhere to God’s Word, I adhere. Where they depart from Scripture, I will in no way support, but will call them out because I love them and desire that they be turned from their deadly errors.

Angry responses put a lot of emphasis on those last two words. Ben would later delete the post.

What is the Duggars’ net worth? What does Jim Bob Duggar do besides 19 Kids and Counting?