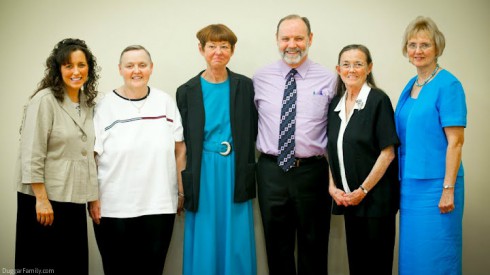 19 Kids and Counting is a true Duggar family affair: Jim Bob Duggar’s mom, Mary Duggar, is a regular on the show. TLC filmed his father’s funeral in 2009. And Cousin Amy Duggar has even starred in her own break-out specials.

So, that begs the question: What about Michelle Duggar’s siblings and parents? Sadly, her mom passed away in 1991, her dad died in 2010 and a sister (second from the right in the top picture) died in 2013. Still, she has five remaining siblings and many nieces and nephews — but, aside from one appearance by a sister and mention of a trip to a reunion, Michelle’s family hasn’t appeared on 19 Kids and Counting.

One big reason Michelle’s family may not appear on the show as regularly as Jim Bob’s family is that the Ruarks (Michelle’s maiden name) moved back to their native Ohio in the 1980s while Michelle stayed in Arkansas to marry Jim Bob. However, the Duggars make regular visits to their aunts, uncles and cousins up north — like earlier this year when they took a big detour en route to Washington D.C. to spend some time with the family.

Cousin time! Happy to be visiting relatives in Ohio from mom's side of the family!

It seems Michelle’s family has also chosen not to appear on the show, because even the Duggar’s trips to Ohio aren’t filmed. (Big road trips are like 19 Kids and Counting‘s bread and butter!) There is some not-so-new speculation this is because of personal differences — specifically how one of Michelle’s sisters, Evelyn Ruark, is a lesbian and her partner spoke out against the Duggar’s religion in the past.

“We are worried about them,” Evelyn’s partner, Sharon, told National Enquirer in 2010. “We have often thought that QuiverFull is a cult. It appears to be brainwashing to me.”

However, Josh Duggar said the whole family is close with his aunt.

“I have an aunt who has chosen to live that life and I love my aunt. I think she is an amazing person,” he told a radio show last year. He added they don’t even have political differences because Evelyn “has told me that she is not for all these measures that are being pushed when it comes to marriage and things. She believes that marriage is between one man and one woman.”

In an interview with the Christian Broadcast Network in 2011, Michelle offered what could be another explanation for why she isn’t incredibly close with all of her siblings: there’s a big age gap! In fact, she said she was an aunt before she was even born.

Still, Michelle described her relationships with her siblings as very good, even though they never let her forget she was the baby of the family.

“I think I remember just having a very happy childhood,” she said in the interview. “My mother and father really made it a very happy home for us… They decided they were going to make a family, a home and a fun place for their family to grow up.”