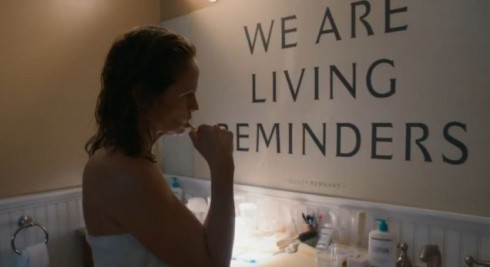 Tonight HBO debuts a new series, The Leftovers, based on the Tom Perrotta novel of the same name.

Perrotta was actually a consultant for the series, but the show will not be a direct retelling of a book. Much like many series adaptations of novels, the novel is a jumping off point. One major difference right off is that the TV series, according to those who have read the book, is that drags out the mysterious premise much longer than the novel. The basic idea is that some people have vanished off the face of the earth, but others are still here, much like the premise of the “end of days” Christian book series Left Behind. Is The Leftovers about this idea, often referred to as The Rapture, or is something else going on?

First of all, only two percent of the world’s population vanishes, and it includes a seemingly random array of people including babies, both criminals and “good” people, both atheists and people of all religious affiliations. Justin Theroux stars as the police chief of New York suburb who tries to maintain normalcy when everyone is freaking out about being left behind 3 years ago. Since then no one knows what to make of what happened, and the town is being stalked by a chain-smoking, mute cult dressed in white. If it wasn’t The Rapture, it still seems that some sort of version of the apocalypse took place, and people are just trying to keep their sanity and live their lives in a world washed over with fear and uncertainty.

Damon Lindelof, the creator of Lost co-created the show with Perrotta. “This show is about the condition of living in a post-apocalyptic world where, if you look out the window, it doesn’t look like the apocalypse happened,” Mr. Lindelof explains. “But it did.”

The Leftovers premieres tonight June 29 at 10/9c on HBO.

A grown up dose: Something More Than Free by Jason Isbell