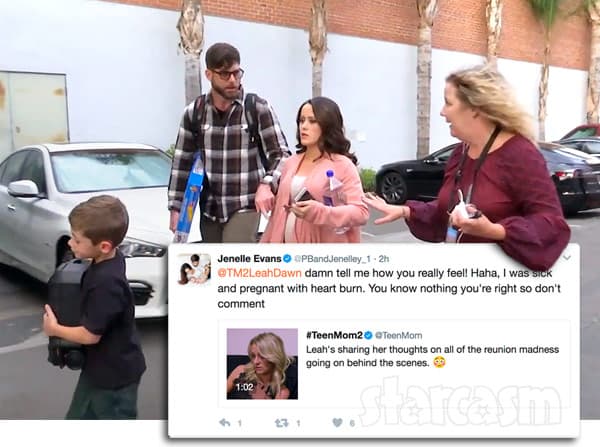 Earlier today we shared a Teen Mom 2 preview clip in which Jenelle Evans creates panic among the show producers when she storms off the Reunion taping set. “I just keep telling everyone I don’t feel good and nothing’s being done about it!” a frustrated Jenelle explains to her producer as they walk briskly in a scene that could have been directed by Aaron Sorkin. “I’m gonna make myself feel better and I’m going to leave,” Jenelle concludes.

The clip drew some criticism from fans, and Jenelle took to Twitter to explain what happened in a little more detail.

Tonight’s episode… I was extremely emotional at the reunion and I think the most of it was because I was pregnant but concerned for my son.

The tweets spawned more negativity and more reactions from Jenelle:

TWEETER: @PBandJenelley_1 but but but your big excuse was you were sick and no one cared?? cant keep your lies straight??

JENELLE: I was sick because I had acid reflux/heartburn from not eating. No one cared cuz I asked for food for 3 hours and wasn’t allowed to leave

JENELLE: I had acid reflux because I was pregnant. Had it every day until I delivered. Even made me throw up like crazy. ?

Meanwhile, in a behind-the-scenes clip released today as well, Leah Messer doesn’t seem to have much sympathy for her co-star as she reacts to Jenelle’s departure by stating “she gets paid for this, she should be here.” In stark contrast, Leah’s reaction to Chelsea (who is pregnant just like Jenelle) being sick and unable to film was sympathetic. “Chelsea is sick,” Leah says. “I do not blame her, she is carrying a child she needs to go ahead.”

Jenelle shared a link to Leah’s clip on Twitter and responded by writing “@TM2LeahDawn damn tell me how you really feel! Haha, I was sick and pregnant with heart burn. You know nothing you’re right so don’t comment.” She followed that up with another brief tweet: “Don’t be fake. #Truth”

While the clips and the fallout are quite entertaining, I think my favorite part of all this is Jace. Nobody is more used to drama hurricanes than him, and when one makes landfall, lil dude just rolls on out: 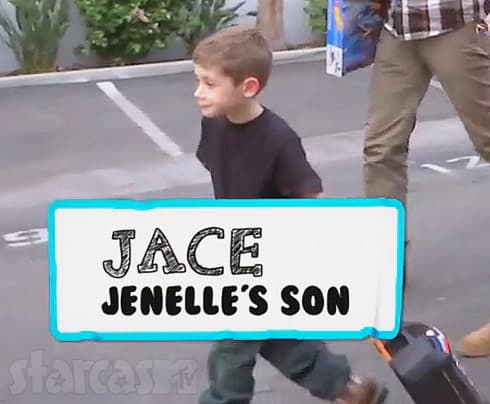