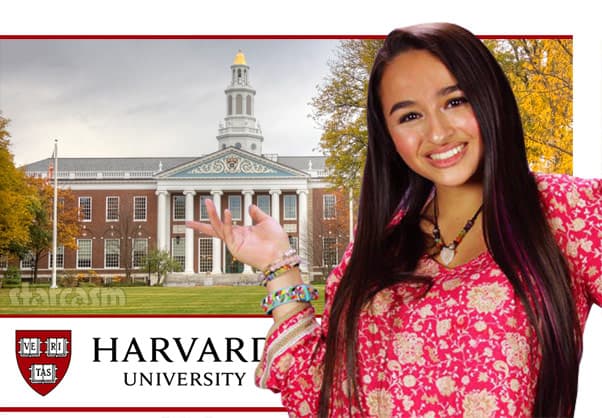 What a year it has been for Jazz Jennings! The 18-year-old transgender TLC reality star underwent a gender confirmation procedure last June, and shared the process — including her recovery — on the fifth season of her reality series I Am Jazz. Last week it was announced that I Am Jazz had been picked up for a sixth season, and this week Jazz revealed that she has been accepted into Harvard University and Pomona College!

Jazz shared excerpts from her Harvard and Pomona acceptance letters in her Instagram story. “I’m stuck between Pomona and Harvard,” Jazz captioned a separate selfie. “Find out what decision I’ll make on the next season of #IAmJazz on TLC,” she teased.

Jazz talked with People last month about her potential college plans, and both Harvard and Pomona were obviously high on her list. “I did have an interview with Harvard and I think it went really well,” she revealed. “I’m hoping that they will accept me because it’s definitely one of my top choices.”

But, just like all college applicants are advised to do, Jazz kept her options open. “I’m also looking at Pomona in California because that’s just a school I’ve always been interested in,” she said. “And Princeton as well. I had an interview there, but we’ll just have to see where I get into.”

Given the recent college admissions scandal, it was inevitable that some folks would question the merits of Jazz’s admission — despite the fact that the admissions scandal is all about paying large amounts of money, and not skipping ahead of more qualified applicants due to fame. Regardless, the naysayers were quick to offer up their take, and Jazz’s brother Sander was just as quick to respond in defense of his sister:

COMMENT: No offense but let us be honest. Jazz only got into Harvard because she’s trans and has a show on TLC. She didn’t get there academically. Not exactly fair.

SANDER: My sister Jazz is the smartest person I know. Her test scores, grades and extra curricular activities met all the requirements for Pomona and Harvard . So, not only has she been able to serve as a role model to so many, she has also been able to balance it with her academics. So please don’t take away from my sisters amazing accomplishments! I hope you reconsider your comment, because it was “Not exactly fair.”

Jazz thanked her brother and her supporters. “I love you too Sander! ?Thanks everyone for the kind words of support!❤️”

But, Jazz can defend herself — and she did exactly that, with receipts! She shared a graphic in her story (below) that provided the following information about her academic record, as well as a message for the haters:

Try to tell me I didn’t get in out of academic merit ??‍♀️. Yes, my advocacy and the show helped significantly, but my balance of that combined with my academic achievements is what ultimately got me admitted. I worked hard and I know that.

Okay, I am done bragging now lol. I have the right to be proud of myself, but I don’t want to come across the wrong way. ??‍♀️ Thank you to everyone who supported me and helped me get to this point! I have a tough decision to make, but I’m so grateful just to have the choice. Wish me luck ??? 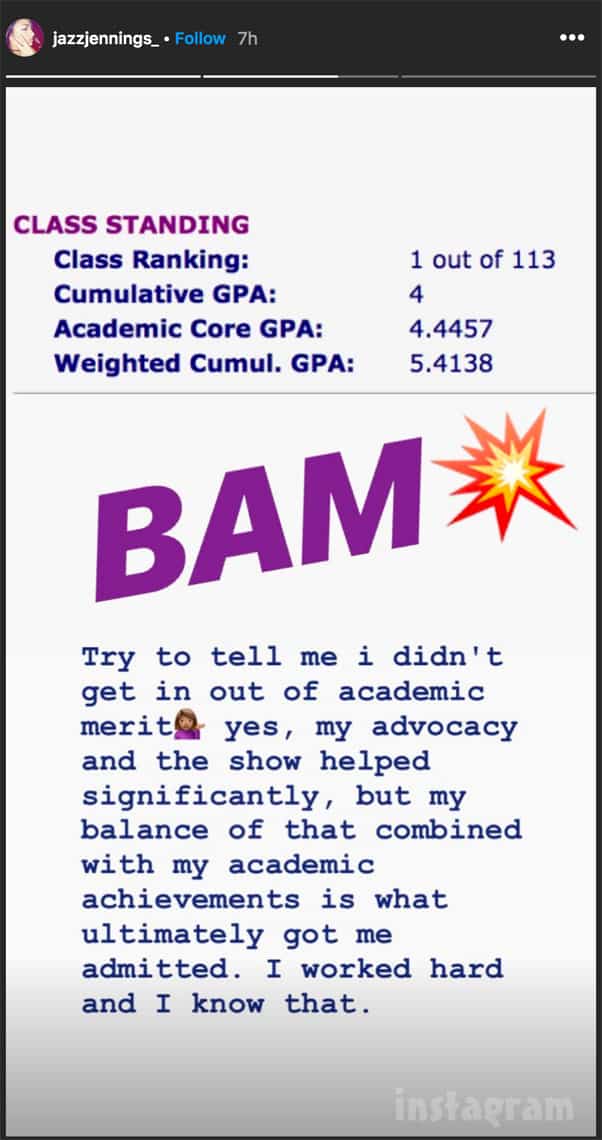 In addition to deciding which prestigious university to attend, Jazz will also need to decide what course of study to pursue. She revealed to People that she has already narrowed it down to a list. “I have some ideas. I’m thinking about gender studies. Philosophy, maybe even Religion. Communications, Journalism, Writing. All those things.”

Jazz then expanded to talking about her goals more globally. “With my life what I want to do is really combat a lot of the social systems that have dictated our societies for so long,” she said. “There’s so many things that people don’t even realize they are allowing to rule their lives. I’m hoping I can just do what I can to help this world move forward to a more loving and accepting place where we don’t judge each other as much.”

Say hello to my ever-changing form!✨You can judge her all you want and comment that I’m fat, unattractive, a man, etc., or you can think those things in your head, but I know my own beauty and worth, and nothing that you say can stop me in my tracks!??‍♀️I love you all, and I hope this inspires you to be confident and realize that beauty has no limitations!??‍♀️?? — Anyway, I have never really flaunted my body in this way before as I’ve faced a ton of insecurities in the past about my weight. As many of you know, I have severe struggles when it comes to binge-eating, but lately I have been taking control of my life and being more conscious about what I put into my body. My sister has been such an inspiration for me— her mantra of treating her body like a temple is so true and effective?? It’s super hard because food is SO DAMN GOOD, but my health is important and I know I will succeed while still being able to eat what I want in a controlled manner. I got this and so do all of you in everything you try!???✨ — Watch how I designed my bra with @knixteen on the new episode of #IAmJazz tonight at 9pm on @TLC !!!??? Click the link in my bio to shop!

One thing Jazz did not reveal is whether or not she received scholarships to Harvard and/or Pomona. The cost of one year of Harvard (figuring in tuition, room and board, fees, and personal expenses) is roughly $75,000. Pomona is just a couple thousand below that. Harvard does have a HUGE endowment, which allows for a lot of financial aid packages for students. From Investopedia.com:

For the 2018-2019 year, the university says that most students from families making less than $65,000 a year attended absolutely free. If you came from a family making between $65,000 and $150,000, you typically have to kick in 10% of your family income or less. Students with families making slightly more also receive considerable financial support from the school.

One statistic in particular illustrates the scope of the university’s aid program, which is entirely need-based. For roughly 90% percent of families, Harvard actually costs the same as, or less than, an education at a state school.

I have to confess that a reality show starring a transgender student at Harvard University sounds mighty intriguing! That also sounds like a great concept for a scripted TV show. ?

Derick Dillard invites Jazz Jennings to have coffee with him, still insists transgender is a ‘myth’ and a ‘delusion’