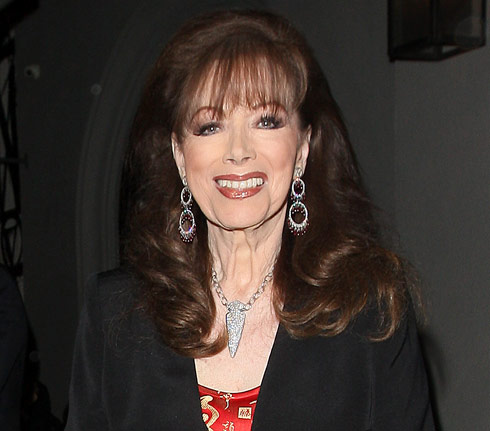 World-famous best-selling author Jackie Collins has passed away after secretly battling breast cancer. The 77-year-old novelist was reportedly diagnosed with stage 4 breast cancer six-and-a-half years ago, but she elected to tell only a handful of close friends and family.

“It is with tremendous sadness that we announce the death of our beautiful, dynamic and one of a kind mother, Jackie Collins, who died of breast cancer today,” the Collins family told People in a statement.

“She lived a wonderfully full life and was adored by her family, friends and the millions of readers who she has been entertaining for over 4 decades. She was a true inspiration, a trail blazer for women in fiction and a creative force. She will live on through her characters but we already miss her beyond words.”

Joan’s sister Jackie Collins said the news of Joan’s death left her “completely devastated.” Joan, 82, tells People, “She was my best friend. I admire how she handled this. She was a wonderful, brave and a beautiful person and I love her.”

Jackie spoke with People on September 14 about her cancer diagnosis and her choice to keep it private up until then:

“I did it my way, as Frank Sinatra would say. I’ve written five books since the diagnosis, I’ve lived my life, I’ve traveled all over the world, I have not turned down book tours and no one has ever known until now when I feel as though I should come out with it,” said Collins, whose treatments over the years included a lumpectomy, radiation and various drug courses and combinations.

“Now I want to save other people’s lives.”

The memorial services for Jackie Collins in the U.S. and U.K. will be private. The Collins family asks that in lieu of flowers, donations be sent to the Susan G. Komen Breast Cancer Organization (in the U.S.) and Penny Brohn Cancer Care (in the U.K.).

Carrie Fisher dies after heart attack at the age of 60