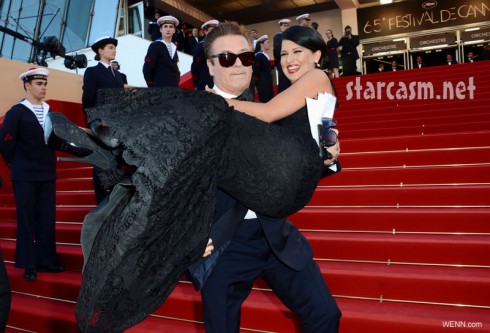 Alec Baldwin made a bold and chivalrous photo moment when he carried fiance Hilaria Thomas up the stairs at a 65th Cannes Film Festival red carpet premiere of Moonrise Kingdom.

If she’s like me, she was probably worried about wobbling on her heels up those steps in front of a deluge of international photographers, and 54-year-old Alec really stepped it up for his bride-to-be! Not only did he solve her problem, but the Words With Friends enthusiast turned it into a fairy tale moment.

He set a dangerous president though, because now he might be expected to carry her at EVERY red carpet event. Just kidding, it’s a really sweet gesture. I’ve gone from not liking Alec AT ALL because of his terrible tirade to his daughter Ireland (still NOT cool, but they have seemed to have moved past that now), to enjoying his genius portrayal of Jack Donaghy on 30 Rock, to being amused by his epic authority rifling Words With Friends habit, and now I sort of want to marry him too. But not in a stalker kind of way. And I don’t really want to marry him.

The couple are set to get married this September, and recently enjoyed a romantic trip to Rome.

PHOTOS Are Alec Baldwin and Mary-Louise Parker dating? Are they developing a new show?