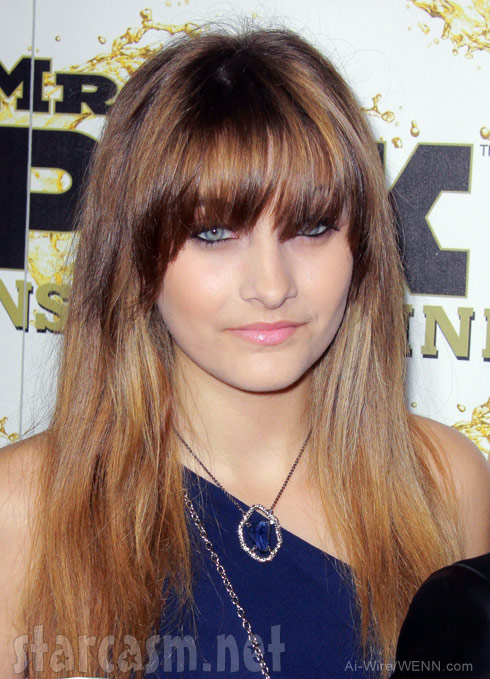 The internet rumor mill is abuzz with reports that Michael Jackson’s 16-year-old daughter Paris Jackson is pregnant after she was reportedly seen sporting a baby bump and toasting with glasses of water while on a romantic date with her mystery boyfriend. The reports surfaced just two days after Paris and her beau were allegedly seen shopping for engagement rings.

Most websites reporting on the Paris Jackson pregnancy rumor are citing the UK’s Daily Star as the source after they published an article Monday that quoted a source as saying, “I saw [Paris] at dinner and she twice made a toast drinking water instead of wine.” This source then added, “That and the prominent stomach bulge got people talking.”

As it turns out, the Daily Star just did a shoddy job of citing their source, which turns out to be a parody entertainment website called Mediamass. Mediamass originally published both the engagement ring shopping story (on Friday) as well as the pregnancy story (on Sunday). In their articles they attributed the initial reports to the American Sun-Times newspaper, which doesn’t exist as far as I can tell. (It should be pointed out that Mediamass changes the date of their posts whenever they are updated so the date on the post itself does not reflect when it was originally published.)

On the website’s “About Us” section it reads:

The ‘People’ section is a humorous parody of Gossip magazines, all stories are obviously not true.

Paris Jackson is Highest-Paid Heir in the World

Also in their “About Us” section, the website explains that what appears to me to be an obvious stab at search engine traffic, is actually “the medium of our satire to expose with humour, exaggeration and ridicule the contemporary mass production and mass consumption that we observe.” It later reveals that rumors such as the Paris Jackson pregnancy are exactly what it wants to accomplish:

Sensationalism, lack of verification of information, ethics and standards issues are only symptoms of the actual social and economic order. This is particularly obvious when observing the role of social networking sites in spreading rumours.

In the end, this whole story is a textbook example of how a rumor can easily get started. A disreputable source initially reports it, but then a not-quite-as-disreputable site picks up the story without properly citing the source. Now other sites and individuals are infinitely more likely to report on or talk about the story, and BOOM!

So, in summary. Is Paris Jackson pregnant? No. Or if she is, it’s a random coincidence.