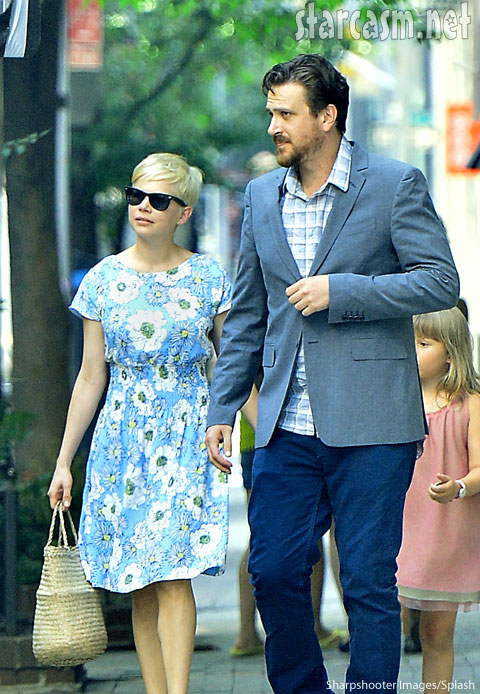 There were reports this week that adorable couple Michelle Williams and Jason Segel got engaged at Comic Con. The story was that Jason surprised Michelle at her Comic-Con hotel room with purple flowers everywhere, and her 6-year-old daughter Matlida holding a lavender bouquet. The bouquet supposedly had a note inside that said “Will you marry me?”

It’s a cute story, but a rep for Michelle told E! News that the story simply wasn’t true.

The pair started dating this year, and Jason has seemed to already bond with Matilda, Michelle’s 6-year-old daughter with the late Heath Ledger. They’ve often been spotted about Michelle’s Brooklyn home looking like a happy family, but that doesn’t mean they need to rush things. In the end, it’s not engagements or marriage ceremonies that matter, it’s the strength of the relationship.

Even so, Jason joked this April that he needed to secure an engagement as soon as possible:

“My plan is to get her to marry me as quickly as possible before she finds out who I really am. I’ll do it romantic, but I’ll do it like over a three-day weekend. We’ll meet on Friday, have our first date on Saturday, engaged on Sunday and married on Monday.”

We’ll next see Michelle on the big screen in the much anticipated Oz: The Great and Powerful, due out in 2013. Jason’s next project is a pseudo-realistic flick The End of the World where Jason, his Freaks and Geeks costars James Franco, Seth Rogen, and other celebrities face the end times at James Franco’s house. Sounds like a riot.

Michelle Williams gets a new haircut