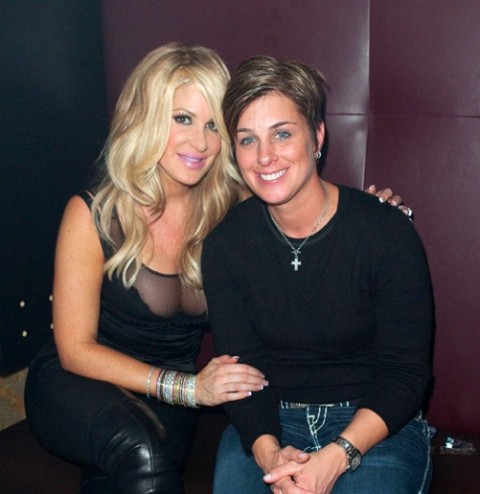 Life & Style is reporting that Kim Zolciak has finally publicly admitted to being bisexual and dating DJ Tracy Young (who remixed her “Tardy for the Party” single.) She’s been often photographed with Tracy, and teased a crowd at New York’s star bar by hinting that she might be dating a woman.

She’s denied ever having dated a woman many, many times to television and print sources over the past few months , and even announced that she’s back with Big Poppa Lee Najjar) again. Earlier this month she was seen flashing the giant engagement ring Big Poppa gave her at the end of the second season of Real Housewives of Atlanta, but in this long-term kept-woman type of relationship, that probably doesn’t mean much.

The latest issue of Life & Style (via MediaTakeout.com) says that Kim Z. actually uttered the words “I’m bisexual,” and that quoted her girlfriend Tracy Young as saying that dealing with all the attention has been difficult, but they’ll “figure it out better when the time is right.”

Here’s what Kim had to say about her first encounter with Tracy:

“I had split up with Big Poppa, and she had just ended a relationship she had been in for three years. The first night we met, we just connected on a different level. There were sparks, but [physically] it was a gradual situation. Tracy made the first move. Our first kiss was passionate and exciting.”

All this flip-flopping back and forth between DJ Tracy Young and Big Sugar Daddy is dizzying and tiresome (maybe she’s dating both, wouldn’t that be fun?), but it’s having the desired effect on me: I can’t wait to tune in for the third season of The Real Housewives of Altanta to see exactly what kind of storyline Kim will be presenting. I’m Bravo’s b*tch that way.

Either way, Kim is relieved to have her woman-lovin’ secret out. Out and proud, whoo-hoo. Here’s what she tweeted:

“I feel like the biggest weight is off my shoulders, Publicity stunt my a** this is MY life.”

Oh, and she also wants to be on “Dancing With the Stars.” That would be all kinds of awesome. Please, DWTS producers, put Kim Zolciak on next year!