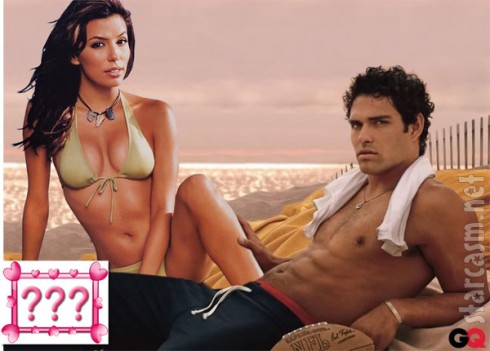 Eva Longoria may be newly single, but that is not slowing this desperate former housewife down one bit! The 37-year-old actress is rumored to have found a new man — a quarterback, to be exact. Longoria’s reported love interet is none other than New York Jets QB hunkster Mark Sanchez! The two have reportedly been dating for over a month, but have yet to be caught by the paparazzi. (Yes, that is just a poorly done Photoshop job above.)

“It looks like they’re testing the waters,” an insider tells In Touch of this cougar and her cub — Longoria is a good dozen years his elder. (Any one else getting a Desperate Housewives Gabrielle Solis/gardener John vibe here?)

According to the magazine, Longria and Sanchez were spotted together on June 4 doing some shopping in his hometown of Bedminster, New Jersey. The following evening, the couple had dinner and drinks with friends at New York’s Hotel Griffou — with Longoria reportedly wearing a blonde wig to help remain incognito. The source claims, “They were laughing and having a great time.”

Their most recent rendezvous? A romantic getaway to the Caribbean! These two have been so busy keeping a low profile, they needed a vacation.

Ironically, Longoria hadn’t even confirmed that her relationship with Eduardo Cruz was over until just last week. The two had been dating since early last year after Longoria’s divorce from her cheating ex-husband, Tony Parker, who was reportedly double dribbling with Erin Barry, the wife of his Spurs teammate Brent Barry.

Sanchez was most recently linked to model Kate Upton, and has previously dated Jamie-Lynn Sigler and Hilary Rhoda. He’s also been linked to Hayden Panettiere and Kim Kardashian! This quarterback seems to have a thing for celebrities! (To be honest, he seems to be scoring big off the field more than on it – a stark contrast to his recently acquired backup, Tim Tebow.)

Anybody else dying to see what Eva Longoria looks like in blonde stealth mode? Where are the paparazzi when you need ’em?!? I guess they’re all over at Katie Holmes’ apartment building 🙁

PHOTOS Sammy Sosa’s bleached skin pictures before and after

LHHNY Did Peter Gunz get back together with Tara Wallace? New spoilers indicate rekindling of old flame