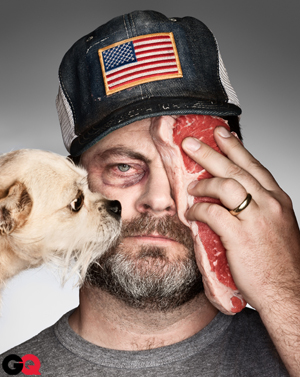 In actor Nick Offerman’s recent interview with GQ the 42-year-old actor dishes about a plethora of topics, including how to be a man, how to love a woman, and why he’ll never tweet again. And, as a special Fourth of July bonus, he channels his meat-loving Libertarian character Ron Swanson from NBC’s Parks and Recreation to create his list of “The 25 Most American Things You Can Do Today (That You Can’t Do in Socialist Europe or Some Other Backwater).” 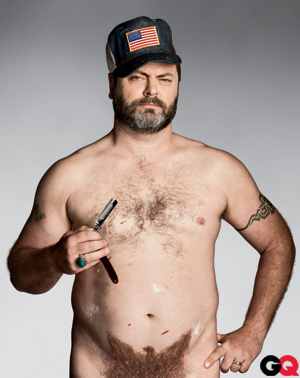 * In case you’re wondering what the Hell the above photo is about, please consult #4 below…

1. Shoot your own dinner entrées.

3. Carry a sidearm into church.

4. Shave your pubes into an American eagle.

9. Visit the historical home of Laura Ingalls Wilder and drink a half pint of Old Darlin’.

12. Learn about the Bible in science class.

13. Gape at the majesty of California’s giant redwoods while watching Ax Men on an iPad.

14. Carry a sidearm into an antique-furniture store.

15. Stand at the South Rim of the Grand Canyon and contemplate the grandeur of the combination safe full of sidearms in your nearby RV.

16. Go an entire week eating nothing but corn-syrup-based comestibles.

18. Not hear any Dutch accents.

19. Stand at the northern border and pass gas into Canada.

20. Secede from the union and form your own island state. (Still working out the bugs in this one.)

21. Watch a WNBA game live and revel in the physical prowess of women who know what the human body is supposed to look like.

22. Catch a largemouth bass, release it, then drive to McDonald’s in a Hummer and step up to a delicious McRib.

23. After that delicious McRib, hum “I’m Lovin’ It” while carrying a firearm into a Buddhist temple.

24. Become obese, then immobile, and get famous for it.

25. Appear on television and get all the money and tail you could ever dream of by becoming a televangelist.

Be sure to check out the full Nick Offerman GQ article – and Happy Fourth of July errybody!