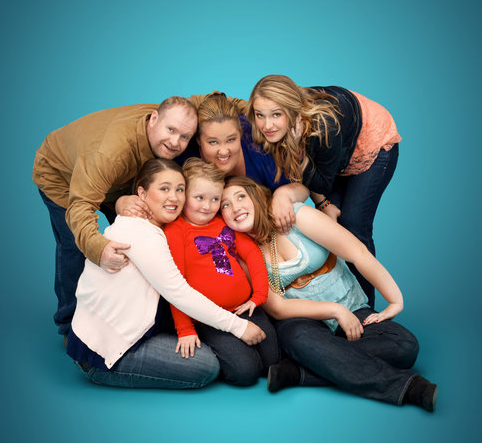 The Thompson-Shannon family of TLC’s Here Comes Honey Boo Boo emerged from a frightening car wreck on Monday night with a few boo-boos of their own.

“It was really scary for us, since it was the first time any of us had ever been in a wreck,” matriarch “Mama June” Shannon said in a statement on Tuesday. “We are definitely really sore today, but our top priority is to celebrate Pumpkin’s birthday.”

The incident occurred in the family’s Georgia hometown when driver “Sugar Bear” David Thompson was attempting to make a left turn. Their suburban was struck by an oncoming car… The Thompson-Shannon family concedes the other car had the right-of-way, but claims the car was impossible to see because the other driver wasn’t using headlights.

According to TMZ, Sugar Bear and the other passengers in the car — “Honey Boo Boo” Alana Thompson, Mama June, “Pumpkin” Lauryn Shannon and “Chubbs” Jessica Shannon — were checked out at a local hospital: “Pumpkin says Sugar Bear has a contusion on his back, Mama June has a back and neck sprain, Honey Boo Boo hit her head against a passenger window and has a headache, and Pumpkin herself has severe chest bruises and is having panic attacks.”

In her statement, Mama June thanked fans for their concern.

“As always we want to thank everyone for their support and well wishes.”

UPDATE – Mama June has since updated fans on Facebook with this statement:

OH K I WANTED TO LET EVERYONE KNOW YES WE WAS IN A CAR WRECK LAST NIGHT WE R OH K ALANA HIT HER HEAD ON THE DOIR WINDOW AND IS HAVING HEADACHES ME MAMA JUNE I HAVING BAD HEADACHES AND ALOT OF PAIN IN MY BACK ..SUHARBEAR IS OH K HIS BACK WAS HURTING BUT BETTER TODAY….PUMPKIN HAD A SEVERE PANIC ATTACK AT THE WRECK AND AFTER THE HOSPITAL VISIT THE DETERMINED SHW HAS SEVERE BRUISING IN HER CHEST AND IT HARD FOR HER TO BREATH LIKE SHE SAUD WGAT A WAY TO REMEMBER TURNING 14 TODAY AND JESSICA WAS IN THE VERY BACK AND WAS NOT HURT …ANNA AND KATILYN WASNT WITH US LUCKY ENOIGH …BUT BANGED UP AND ALL CAUSE PUMPKIN HAS BEEN STILL VERY UPSET SINCE THE WRECK SO WE R GOING TO DINNER LIKE WE PLANNED TO CELEBRATE FOR BDAY…THANKS FOR YOUR THOUGHTS AND CARING FOR US WE WILL B OH K CAR CAN B HOPEFULLY FIXED BUT GREAT THE OTHER GUY WASNT HURT …THE TRUE STORY LIKE I REPORTED TO TMZ WE WAS IN MILLEDGEVILLE WE WAS AT THE RED LIGHT IT TURNED GREEN WE WAS TURNING LEFT TO PAY OUR LIGHT BILL WE LOOKED UP I SAID LOOK THAT PERSON DONT HAVE HEADLIGHTS ON AND WAS GOING VERY FAST I TOLD SUGARBEAR WATCH OUT BUT THE TRUCK WAS ON US AND DONE HIT US B4 WE KNEW WHAT WAS GOING ON …I WAS VERY WONDERED BOUT THE OTHER GUY TOO AS HE WAS ONLY 19 YRS AND WAS WORRIED BOUT WHAT HIS PARENTS WOULD SAY …

UPDATE – Mama June has been sharing numerous updates, including photos of Pumpkin in the hospital as she continues to struglle with post-severe concussion symptoms and post-traumatic stress disorder from the wreck. Click here to read them all and see the photos!