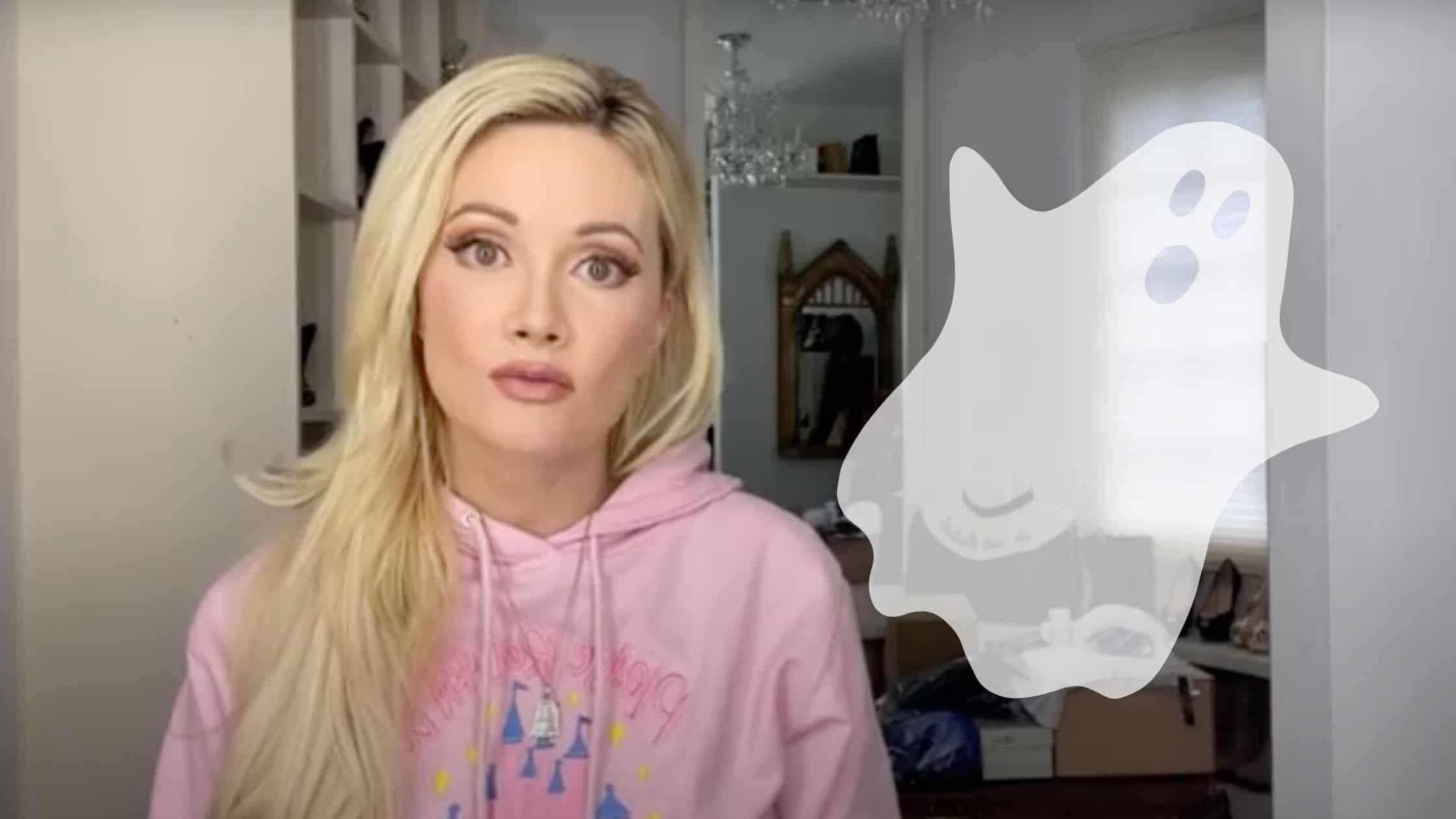 In late April, 2021 Holly Madison sat down on her YouTube channel to reveal some truths about her time making the reality show Girls Next Door, which ran from August 7, 2005 to August 8, 2010. At the time she was dating Playboy founder Hugh Hefner, which seems like was an overall dark time for her. The show, however, offered some bright spots for her time at the notorious Playboy mansion.

How long was Holly Madison at the Playboy mansion?

“I was there for seven years total,” she says. “And for the first 3-and-a-half years things were really, really miserable and I always kind of had hope that things would get better, and they got a lot better when the show came along.”

She was really nervous about doing the show, but she says that the dynamic within the house really changed for the better because of it. Compared to the dark years prior to working with the show, it was a “happy time” for her.

How fake was Girls Next Door? Did producers feed her lines?

Holly goes on to reveal that producers “absolutely” fed her lines that she didn’t want to say. However, she points out that it was nothing that was “too big of a deal.” One thing that did annoy her was that she had to repeat herself a lot.

She says that after she wrote her book Down the Rabbit Hole (affiliate link)about her experiences, she willfully tried to forget a lot of things, so it’s hard for her to recall specific lines that she didn’t enjoy saying.

She does recall a situation where they wanted her to appear jealous of a girl when she didn’t feel that way at all. They tried their best to convince her that she really felt that way, but she stood her ground and refused to play into the storyline for them.

Did Holly Madison have a good relationship with the other girls

Holly maintains and she had good friendships with the girls while they were filming the show.

How were the staff at the Playboy mansion?

Holly says the staff was “totally nice” and she doesn’t recall any disrespectful or creepy behavior of anyone. The Playboy mansion was quite an entity that required a lot of people and work to run smoothly. They had butlers, chefs, people who worked at the zoo, and who produced the Playboy videos. She can’t recall anyone ever getting fired for overstepping boundaries and thinks they were probably all told to stay away from the girls.

Was the Playboy mansion haunted

Holly is absolutely emphatic that the sprawling estate is, indeed, haunted. She personally saw a full-body ghost at the gym, and she said Bridget saw one in her own room. She told Bridget that she was still skeptical, and wanted a sign. At that exact moment, Bridget’s TV came on unexpectedly and Holly saw that as a sign.

Holly also had a special bathroom that she would hide in to be away from people, and the toilet in that bathroom would randomly flush.

In a 2019 with Australia’s Channel 7 Morning Show, Bridget Marquardt recalled seeing a woman spirit at the mansion. She feels like this is a former employee and only got “good vibes” from her.

Holly Madison had a strict 9 p.m. curfew the entire time

Holly had a very controlled life during her time at the mansion, including a 9 p.m. curfew for the entire time she lived there. Sometimes the girls were allowed to stay out later if they were filming something for the show.

She was not allowed to travel for any reason beyond filming for the show. She was afraid to test these limits because other girls were fired for just going to visit their family for a few days.

Was there competition between the girls for screentime?

Holly says this idea came from a recent show on E! that looked back on the series and the history of reality TV and featured an interview with the Girls Next Door executive producer. Holly did not participate in this show because she’s tired of having her words edited to portray narratives out of her control.

She says he claimed that the girls were very competitive and jealous over screen time and that Bridget would time how many minutes each girl got with a stopwatch. Holly says this is a lie and feels bad that Bridget was brought into this idea.

Holly says she used to be charmed by this person, but she started to realize that he would try to play the girls against each other and manipulate their behavior.

Holly says that she had very ambivalent feelings about the show that made her shy away from attention and screentime, especially at first. She wasn’t extremely proud of her relationship with Hugh Hefner, was looking for a way out of it, and was nervous about having that relationship be the focus of attention and drama.

She says she didn’t enjoy filming the show until Season 3, and would often hid in Hugh Hefner’s room to prevent herself from getting screen time. She says she feels like he was “gross” and a manipulator who treated the girls like puppets.

Holly also points out that a lot of tension between the girls came from Hugh Hefner from the beginning. He would set different rules for different girls, and seemed to feed his ego by causing disharmony between them.

Holly Madison left the show, and Hugh Hefner, because he became verbally abusive

Holly was supposed to stay both with Girls Next Door, and Hugh Hefner for a while two of his other main girlfriends left, but Holly decided it was time for her to move on with her life because Hugh Hefner became verbally abusive with her, seemingly overnight. She felt like the other girls leaving helped her see who he really was.

Once she left the show, she got involved with another guy. She says she thinks the show didn’t address her departure the way they did the other girls because they thought she would be back, and because they didn’t want to bruise Hugh Hefner’s ego by showing that Holly could be attracted to another man.

She says she thinks the show is what gave her the confidence to leave the situation, and she ultimately doesn’t regret doing it.

Holly reveals that Hugh Hefner was drunk pretty much all day, every day. “I don’t know how he lived,” she says.

Holly says the show was often very fun to film overall, and she would consider doing a reality show again. In fact, one may be already in the works. She’s not, however, interested in a reunion. She might consider a reboot if there’s an interesting twist involved.

Were the girls paid well by the show?

Holly says that at first they received no money for the show, and when they were finally offered salaries, they did not negotiate. In fact, they were each cornered privately with their offer, and it was implied that if they didn’t accept the show would be canceled. This put pressure on them to accept whatever was offered. She felt like this was because Hugh Hefner and the producers wanted to keep them controlled. They also don’t receive royalties from the show.

A small percentage of purchases made through the affiliate link above benefit this website.

Holly Madison is going to be a mommy