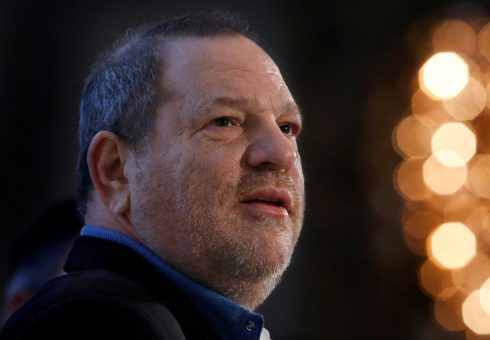 In the latest issue of GQ UK, Piers Morgan revealed he learned from his interview with Harvey Weinstein that the disgraced movie mogul expects to make a comeback. In further Weinstein news, an A-list actor who once confronted Harvey over indiscretions with his girlfriend is producing a film about the news story that exposed Harvey’s long history of sexual assault.

“I’ve spoken to Harvey in the clinic in Arizona, for about an hour,” Piers Morgan told the magazine. “He’s fighting. He’s a fascinating character. The apocalyptic symptom of the whole thing — the casting couch finally brought to judgement.”

“I can’t express the same level of shock as some people in Hollywood,” Piers continued, making the argument that Harvey’s actions while in a position of power were part of a systemic problem in the Hollywood machine:

Listen, this has been the system since Hollywood existed. It’s been a moral cesspit since the Twenties and the idea that Harvey Weinstein is the only villain? Do me a favour. Look at Mel Gibson: ultimately Harvey believes he will be forgiven.

Mel Gibson’s story doesn’t seem to be an adequate comparison, though. Over 80 women have accused Weinstein of sexual misconduct up to and including rape. If any powerful male is worth the comparison, Bill Cosby’s downfall is a more apt one.

How Cannes is responding to The Harvey Weinstein Effect

Hollywood and the entertainment industry are still reeling from Weinstein’s story, but, as Piers points out, this is not a new thing for showbiz. Right now, the Cannes film festival is trying to address rampant sexual assault at these high-profile movie events by setting up a sexual assault hotline for attendees. Hopefully, the knowledge that the hotline even exists could curtail some potential predators.

One Hollywood A-Lister is Making a Movie about Weinstein

Someone who doesn’t seem to be finding it in his heart to “forgive” Weinstein is Brad Pitt, whose production company has just greenlit a film based on the New York Times piece exposing Weinstein’s crimes.

This story is surprisingly personal for Brad. In the mid-90s, he and then-girlfriend Gwyneth Paltrow were young darlings when Weinstein “plac[ed] his hands on” Gwyneth during a hotel room meeting, then “suggest[ed] they head to the bedroom for massages.”

A source told PEOPLE that when Pitt found out about the incident, he actually threatened Harvey. “He got right in his face,” the source claimed. “Poked him in the chest and said, ‘You will not ever do this to Gwyneth ever again.’”

The upcoming film from Annapurna Pictures will reportedly focus on the “story behind the women who led the investigation itself and will not be about or centered around ‘the man’ or the men behind the abuse. It is about how this team of reporters tracked, chased and broke this story.”

Suzie Hardy has filed a police report against Ryan Seacrest, says he loved to humiliate her

Was it worth it? McKayla Maroney has regrets over gymnastics career because of molestation trauma