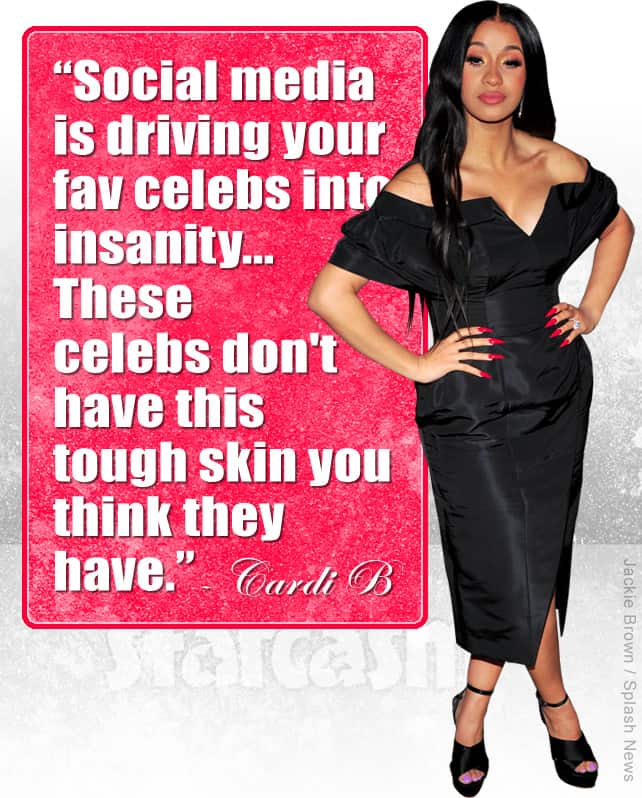 Rapper Cardi B has exploded virtually overnight into one of pop music’s biggest stars, and a lot of her success can be attributed to the way that she addresses topics in her songs. Cardi’s wonderful mixture of unapologetic confidence and hunger — combined with just a pinch of humble self awareness — gives her a uniquely refreshing edge.

Not surprisingly, Cardi put her formula to work in a lengthy response to the overwhelmingly negative culture of social media. The topic has been talked about ad nauseum since the advent of the first social media platform, but rarely with a voice like Cardi’s. The result? Her reflections on the overplayed topic are much like her songs: they rise above the noise with a refreshing resonance.

“Social media is driving your fav celebs into insanity,” Cardi wrote, in a text graphic on Instagram. “If you a fan of these celebs and their work always support them and show love to them. These celebs don’t have this tough skin you think they have.”

In addition to the text graphic, Cardi also penned a lengthy caption, in which she offered up more of her thoughts on the Schadenfreudian crabs-in-a-bucket mentality that prevails online:

Social Media have been the most disgusting place. It makes me question humanity and not only on celebs, on other people and situations. I see people on here laughing and getting joy of other people misery. People be wishing for other peoples kids to be taking away from them. Be wishing that people career fail and fall not knowing how they going to provide for their family next. Wishing heartaches and break up on people’s relationships, marriage and homes. Lowering people self-esteem and what ya do it for ? likes, retweets and a couple of followers or a comment back? Ya forget the evil s**t and mind ya have is the reason why God has you held back in life. I’m not talking bout my self I just see a lot of f**ked up s**t and it’s just disgust me.

I’m sure Cardi B’s sensitivity was amplified by the fact that she is currently pregnant and her baby will be born into the world of celebrity that she describes. 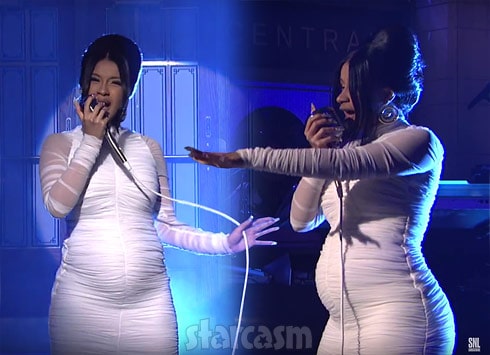 Having been a celebrity blogger pretty much throughout the social media era, I TOTALLY agree with Cardi B. It’s disturbing how “fan” groups, Facebook pages, forums, and the comments sections for the accounts of the celebrities themselves so often turn into a virtual elementary school playground where the bullies dictate the culture and tend to drown out positivity and even constructive criticism.

I think it’s also important to point out that Cardi isn’t expressing frustration over criticism or negativity in general — just the bitter and spiteful mentality that motivates people to not only want horrible things to happen to people, but to be willing to share those thoughts on social media. And, as happens all too often, the sharing results in the virtual applause of likes, retweets, and a couple of followers or a comment back.

Clearly, Cardi B’s quick rise to fame has made the ocean of negativity that much more startling for her. She’s basically done a cannonball into the deep end of the pool of celebrity, so it’s understandable that she has such a visceral reaction to the reality that she’s found herself swimming in. That being said, her comments could easily have been angry, smug, and dismissive — and much less powerful.

I just wanted to highlight and share Cardi B’s message here. I really like her music, but I like Cardi B the personality even more. (Although I don’t know how separable those two things are — which is often the case with great artists.)

To get a healthy does of Vitamin Cardi B in your life, be sure to download her new album — entitled, aptly enough, Invasion of Privacy — available now!