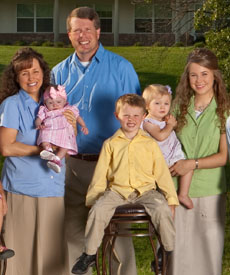 Lo, children are an heritage of the LORD:
and the fruit of the womb is his reward.
As arrows are in the hand of a mighty man;
so are children of the youth.
Happy is the man that hath his quiver full of them:
they shall not be ashamed,
but they shall speak with the enemies in the gate.

The Duggar family is an immense curiosity to most Americans. Former Arkansas Rep. Jim Bob Duggar and his wife Michelle don’t use any method of birth control, but instead allow God to control how many children they have. They consider children “blessings” and gifts from God and believe that using measures to prevent pregnancy is an unholy way to control God, instead of letting God control our lives.

So far Jim Bob and Michelle have 19 blessings. The youngest child, Josie, was delivered prematurely at 25 weeks because Michelle was suffering from preeclampsia, a condition that consists of multiple symptoms that severely endanger both the mother and baby.  Along with other preemie issues, 1 lb., 6 oz Josie suffered from several digestive disorders. She’s now home but she still requires a great degree of care, and her vital signs had to be monitored 24/7 for several months.

The family underwent a great deal of stress, but 43-year-old Michelle is ready for more children, telling this week’s People “I’m not pregnant right now. But that could change tomorrow or the next day or next week. That is out of my hands.”

On the Today show last Tuesday they said they would “welcome” a 20th child. Of course this would obviously pose major risks for Michelle, risks she is aware of, but she’s resigned herself to whatever may happen if she becomes pregnant again.  (In fact Michelle did get pregnant again, but suffered a miscarriage.)

The belief system behind the Duggars’ anti-birth control comes from a fairly new movement among protestant Christians in the United States called Quiverfull. In their 2012 book the Duggars claim that they are not part of the Quiverfull movement, but they still subscribe to the same belief as Quiverfulls: that only God can determine how big your family should be. The Duggars are friends with people who are openly Quiverfull, The Bates, who now have a TLC show of their own: The United States of Bates, and have 19 children.

What is the Quiverfull Movement?

The Quiverfull movement began in 1989 with a book by Mary Pride called A Full Quiver, and the general idea is based around a couple of Psalm bible verses (quoted above.) They denounce “the contraceptive mentality” of most Americans, and even feel that actively choosing to prevent conception as being a slippery slope to abortion.

Children are referred to as arrows in a quiver, and with the idea that it’s best to have your quiver full. There are lots of military metaphors in the Quiverfull language, and having children is seen as the best defense against an evil world.

One of the arguments against what the Duggars are doing is that it’s simply not feasible financially for most couples to provide even the basics for a large brood of children. This isn’t a problem for the Duggars, who manage their money wisely, and are able to get pretty good paychecks from their TLC show, books, media interviews and other business opportunities brought about by their fame. But most practicing Quiverfull families don’t have these financial opportunities, and there are many stories online told by women who have left the Quiverfull lifestyle after suffering financial hardships and, in their views, extreme patriarchal control.

There is also the question of how two people can care for so many children, even Michelle and Jim Bob will agree that two people can’t. The older children, specifically the girls, are the ones who take over many of the child-rearing duties. Star Magazine spoke to the oldest girl recently, 20-year-old Jana, who admitted to “struggling with attitude toward different family members.” The magazine claimed that Jana and her 19-year-old sister Jill have more than their share of parental responsibilities for the other children. They’re said to oversee all the meals, laundry (and sewing homemade clothes), homeschooling, diapers, haircuts, and more for their siblings.

The Duggars usually have a ready-made answer for many of the criticisms and arguments against what they’re doing. To claims that they’re overpopulating the earth, they counter that they’re simply adding productive citizens. When people point out that the childcare actually gets shifted on other children, they say they’re raising people who will be willing to help others.

But there’s one point critics make that Michelle Duggar doesn’t feel comfortable answering with a simple retort: that they simply don’t have enough time to form real relationships with all of their children. She tells People “It stabs my heart when there is truth in it. As a parent, you do worry there is not enough of us to around. I want to finish my conversations with my kids. I want to be connected to them and be the best mother I can be.”