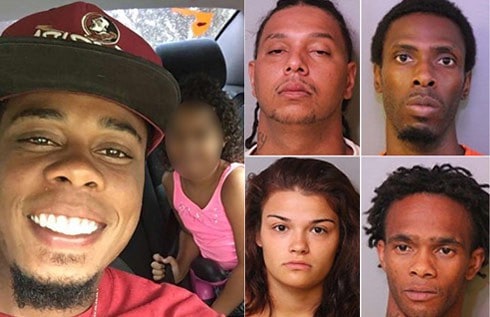 A Florida father has been shot to death after a woman he met on the dating site PlentyOfFish set him up to be robbed.

27-year-old Adam Hilarie went on a date Thursday with 18-year-old Hailey Bustos after the pair met via PlentyOfFish. The pair went bowling and returned to his apartment following their first date. After Hilarie agreed to a second date, Bustos and 3 accomplices returned to his home to rob him.

According to the Orlando Sentinel, Hilarie was shot in the head during the robbery. An arrest report stated, “Hilarie was begging for his life, he was not putting up any kind of fight, and was telling them that he had a 5-year-old daughter.”

Bustos was busted in a separate robbery over the weekend and authorities were able to tie her to the death of Hilarie. According to the arrest report Bustos remained in the car during the robbery and stated that she did not know that Hilarie would be killed. She was paid 50 dollars to set the Florida father up.

Florida mom tasered by officer holding toddler she tossed at him