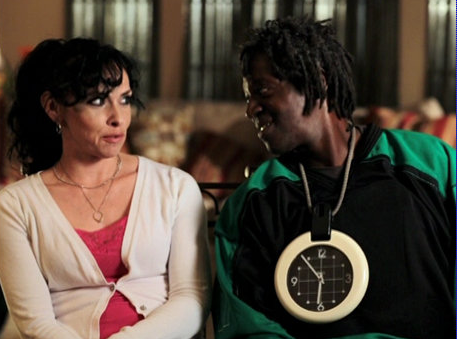 Flavor Flav and his girlfriend Liz Trujillo were facing some serious issues when they filmed Couples Therapy this spring, so serious that they couldn’t even talk about most of them on camera or in group therapy.

One of the things that they were hiding is the fact that Flav is facing a domestic violence trial for allegedly attacking Liz and her son last fall. Another issue that came to light is that Liz was in denial about being pregnant with Flav’s eighth child, and their second together. She asked for a pregnancy test, which came out positive and caused her to completely break down emotionally. From several camera angles on the show it looked like she was possibly five or six months pregnant by the time she took the test. Liz was truly in a desperate state, lamenting that she couldn’t raise another baby alone.

Dr. Jenn revealed that Liz had some personal health issues that made the show monitor her closely after they found out about the pregnancy. At some point the cameras caught Liz seem to pass out while sitting up on her bed, letting her phone just slip out of her hand. After evaluation by the house doctor, they called 911, and Dr. Jenn became concerned because Liz would not reveal her personal health problems to the paramedics.

Back when she was rushed to the hospital in April, TMZ got a tip that she was in the hospital, but they reported that she had ODed on painkillers. Flavor Flav’s rep told them. “The claim of an overdose, or any involvement of drugs, could not be further from the truth.”

Flavor faces 10 years of prison for the domestic violence charges.