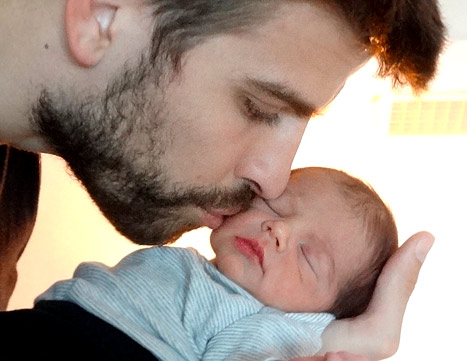 Shakira and Gerard Pique’s son has just made his world debut on the UNICEF website. The site launched an online celebration for two-week-old Milan Pique Mebarak as part of their World Baby Shower campaign which is set to help save the lives of children around the globe. You might say that this is Milan’s first charity event.

“We hope that, in his name, other less privileged children in the world can have their basic needs covered through gifts and donations,” proud parents Shakira and Gerard said in a joint statement. “Thank you for sharing this unforgettable moment with us.”

Over a week ago, Gerard had teased fans with another photo of their new son but it was only of his feet which were sporting customized Nike sneakers which means that the photo you see above is the very first (and only, thus far) face shot of the adorable Milan.

And in case you were wondering, Milan means “dear, loving and gracious in Slavic; in Ancient Roman, eager and laborious; and in Sanskrit, unification.” Who knew Milan would live up to his “gracious” name in such a short period of time? That’s one impressive infant.

Weeks before Milan’s birth, Shakira and Gerard had thrown a virtual baby shower through UNICEF’s website in which the baby gifts went to her were all donated to charity. UNICEF is currently accepting $5-$110 donations as part of the Baby Shower campaign.