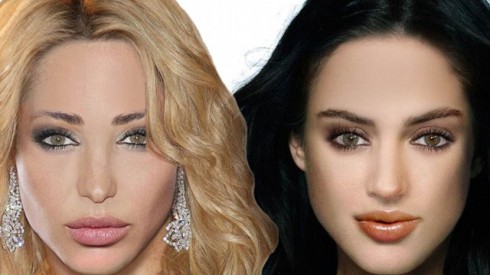 Are these the women men want to date and women wished to look like? So claims a new British survey.

“These two pictures demonstrate the different ideals men and women have when it comes to the female face,” a spokesperson told The Daily Mail of the results. In the top picture, the male-preferred woman is on the left while the female-preferred woman is on the right. “It seems men are still of the opinion that blondes have all the fun and picked out Columbian singer Shakira’s long platinum waves as their preferred hair style, while women favour a more exotic type of beauty, choosing Freida Pinto’s raven locks.”

Take this with a grain of salt: The survey and representations were commissioned by Escentual Cosmetics, which has more experience selling eyeshadow than performing scientific studies. Nonetheless, the survey findings are interesting to consider. 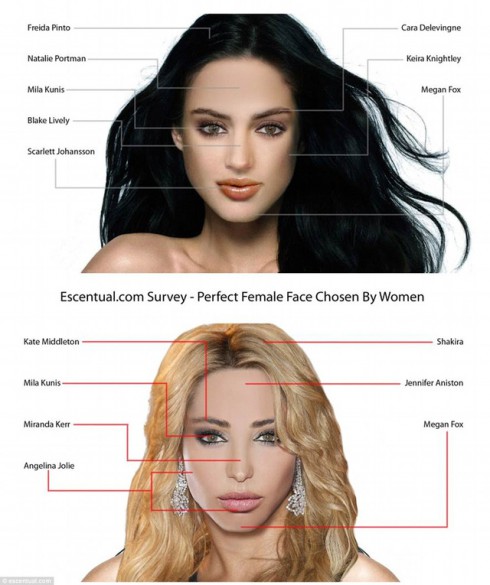 Although the spokesperson called the differences between male and female picks “quite extreme,” that’s definitely an exaggeration: Both the computer-generated women are fair-skinned, hazel-eyed, lush-lipped and thin.

Then again, that might have something to do with how the survey was conducted. Respondents were allowed to select the ideal facial features from celebrities ranging from Shakira to Kate Middleton to Jennifer Aniston. (The information from Escentual didn’t mention an African or Asian woman so it’s unclear whether any were included in the respondents’ options.)

Ultimately, I think we can agree the final renderings are a bit ridiculous… And there’s definitely no need to feel jealous of a computer-generated face.

Dog abandoned at train station with suitcase full of his belongings