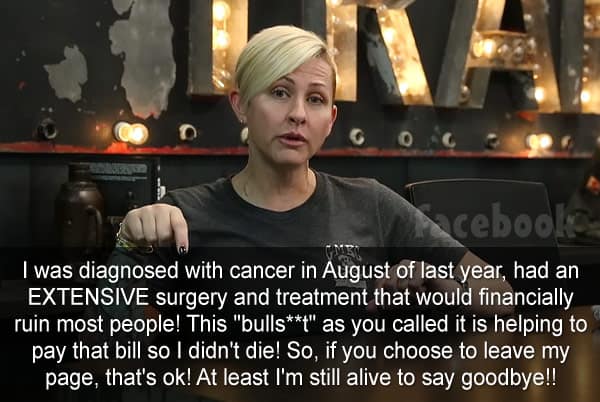 Gas Monkey Garage office manager and Fast N’ Loud star Christie Brimberry is like many celebrities in that her official Facebook fan page often shares stories as part of a link-sharing revenue partnership. However, after receiving one too many negative comments about the posts, Christie penned a frustrated explanation in which she revealed that the posts helped pay for her cancer treatment, which included “EXTENSIVE surgery and treatment that would financially ruin most people!”

So JUST IN CASE IT MATTERS TO ANYONE WHO IS UPSET WITH THE STORIES I POST…..I was diagnosed with cancer in August of last year, had an EXTENSIVE surgery and treatment that would financially ruin most people! This “bullsh!t” as you called it is helping to pay that bill so I didn’t die! So, if you choose to leave my page, that’s ok! At least I’m still alive to say goodbye!!

Here’s a screen cap of the post in which you can see it received over 20,000 likes in less than 24 hours — so it seems some of her fans are cool with how her page is run: 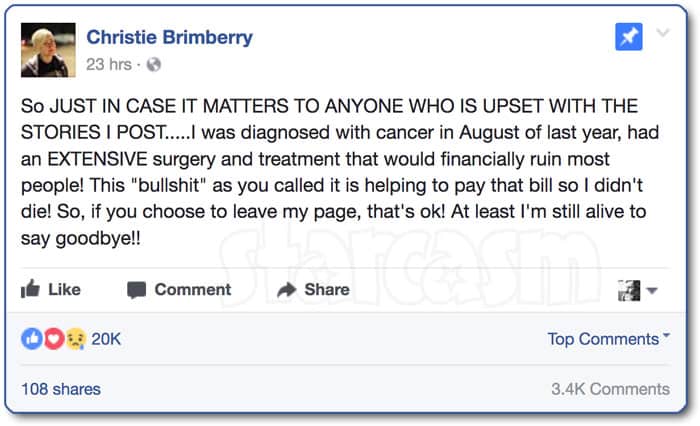 (In case you missed it, Christie revealed back in October that she she had a complete thyroidectomy in an attempt to remove cancer in her thyroid, trachea, and lymph nodes. You can see some of her previous health updates here.)

I’ve never really understood why people get very upset at celebrities for trying to make a little extra money. Can anyone out there really say they wouldn’t share stories on their Facebook timeline for $40-$50,000 a year? I know I can’t! (And that’s hardly the ceiling: some celebrities reportedly make well over $100,000 annually from Facebook posts.) Plus, that doesn’t even factor in Christie’s unique situation, in which she had to deal with what must have been astronomical medical bills.

Of course, I also understand that fans are free to complain about whatever they want. I confess I’m not a big fan of my timeline getting choked up with “First he did this, but you won’t believe what happened next!” kinds of stories, and I don’t ever really click on them. That’s the end of that. If it gets too much, I just unlike the page. Oh, and here’s a little secret for pages like Christie’s: if you load up the posts on her page, there are only six or seven revenue-sharing links posts before you get to all the Christie Brimberry personal goodness! (I assume they delete those posts as they get older? Or maybe they just become invisible?)

Anyway: on a much more important note, we are so glad that Christie appears to continue to do well! I know that I, for one, will continue to follow her Facebook page for more updates 😉