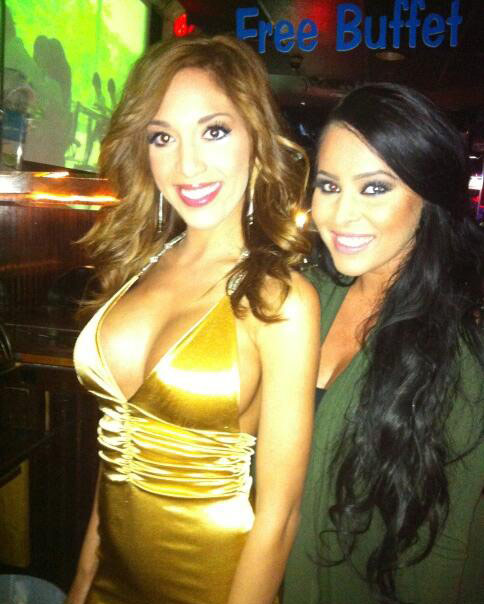 Myla, who shared the same PR manager, Gina Rodriguez, until Abraham recently parted ways, says that the former Teen Mom star tried to get her to join a sugar daddy website.

“Farrah told me she met this guy on a sugar daddy website. She flew out to see him and everything. She said they give you money to like go on vacation or to go shopping. They pay your bills.”

Radar obtained what Myla (seen above with Farrah) claims is a text message from Farrah encouraging her to get in on the sugar baby action. 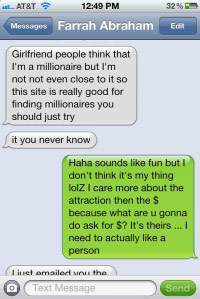 “Going on the site shows how desperate she is for money right now. She did not make that much [from her sex tape]. If she had made that much, she would have shown everyone the check instead of waiting a few weeks to show everyone the residuals check! It’s obvious she was lying. She makes all of her money off of [nightclub] bookings and her sugar daddy website. She’s doing anything she can. She’s desperate.”

Sinanaj went a step further via Twitter when she flat out called Farrah an escort, “lol thank u & don’t worry im gonna air out how @F1abraham is a ESCORT and I have the proof ….coming to a blog near u :)”

Farrah provided a written response to the allegations:

“Thank you For notifying me of lies and scams by both of these women [Myla and her manager] as they will be reported. For the record I am a millionaire, secondly I never optioned that the Fatima or ‘Myla’… ever be apart of those things and I have no idea why they are sending made up texts to cause drama. I no longer speak to them… I have a real life with real people in it.”

Farrah Abraham: Sophia is the most popular in her class, but is insecure about her looks

Farrah Abraham headed back to school for daughter and business goals