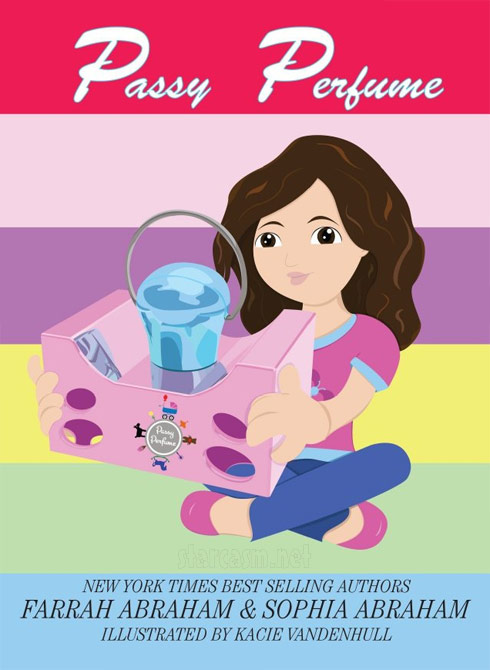 Say what you will about former Teen Mom star Farrah Abraham, but that gal is productive! Less than a year after publishing her New York Times best-selling memoir My Teenage Dream Ended as well as recording an accompanying soundtrack, the momtrepreneur will soon be making another contribution to the media world in the form of a children’s book titled Passy Perfume!

The book is published by Farrah’s company F&S (which stands for Farrah and Sophia) and is available for download as an ebook on amazon for only $2.99. Here’s the blurb from the back cover:

Your most beloved reality star baby and mommy duo Farrah and Sophia Abraham from MTV’s Teen Mom and 16 and Pregnant original cast are back with their second book. New York Times best selling author for My Teenage Dream Ended, Farrah Abraham wanted to expand her literary creativity and make a book relatable for all parents and children and the answer was Passy Perfume. Farrah has struggled with Sophia for two years back and forth through her baby and toddler stages trying to break the bad habit of the pacifier, through crying, bribery, and exhaustion. Farrah finally won with promising Sophia one thing, her very own Passy Perfume, something that is timeless and has no bad consequences like crooked teeth! Farrah Abraham plans to bring Passy Perfume to market for all parents and children alike to have children sparkle with happiness with their timeless keepsake “Passy Perfume.”

The book features 18 colorful pages illustrated by Kacie VandenHull of Hippocorn Designs and is narrated by Sophia, who is well aware that she has a pacifier problem, but isn’t going to give it up unless she gets something of equal or greater value in return. As it turns out, that thing is Passy Perfume! (Which, as mentioned above, Farrah plans on bringing to market soon.) It’s basically the same concept as Paci Fairy, just with a little smell-good spin.

UPDATE – Farrah spoke with In Touch about the book and why she chose to release it only through Amazon Kindle initially. “I chose to release it exclusively with Kindle, because I thought it would be best for parents in so many ways,” Farrah says. “After 90 days, families can purchase from other book retailers and in print. I also loved that I could share our story at a very reasonable price and that’s especially great around the holidays!”

She also confirmed that she plans to release “customizable and engravable mommy and me fragrances” to go along with the book. “It’s what every female and child or parent wants, the perfect gift!” she tells In Touch of her upcoming perfumes. “The engraving will be great for parents who want their child’s name on it!”

Here’s a video clip of Farrah and Sophia promoting the book, which of course starts off with Farrah talking about the Mayan calendar and the imminent end of the world:

I always try to give Farrah the benefit of the doubt, but much like her musical endeavors, this book is probably going to get brutalized by the internet. Combine the unfortunate spelling of “passy” (with the brush script font used in the book the eye can be tricked into seeing a slightly different, more feline word) and the really heavy-handed language we’re supposed to believe is Sophia and not just Farrah trying to sell a product, and you have a recipe for lots of criticism. Here’s an example passage from the book in which Sophia is looking back on all the fond memories she has shared with her pacifier and explaining why she hasn’t been able to give it up:

“My mom has yet to capture the history I’ve had with my passy and give me something new, valuable, taking my passy to the next level of ages with me. Is a keepsake asking too much?”

No word if there will be an accompanying soundtrack for Passy Perfume, although Farrah has suggested in the past that she and Sophia were working on some music together. Perhaps another future project?

Oh, and it seems there may have been a bit of a mix up as to when the book would be available because Farrah tweeted earlier today, “SO EXCITED! count down til my first Children’s Book release!! DEC.11 get ready # PARENTS :)”