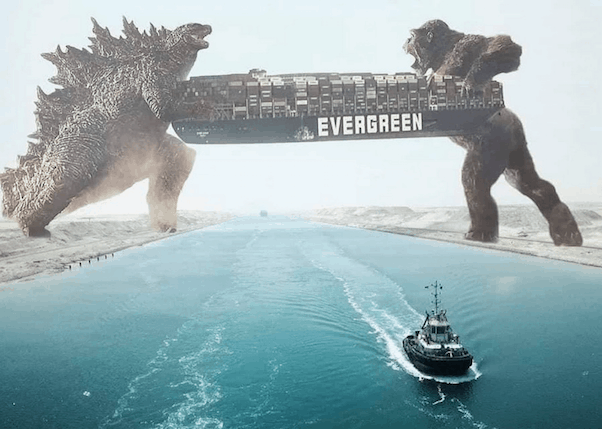 VOX – Ever Given, the massive container ship that blocked the Suez Canal for a week and brought worldwide commerce to a halt, has been freed. Keep the ship’s name in mind for Final Jeopardy in a couple more years

THE HOLLYWOOD GOSSIP – Chrissy Teigen made headlines a-plenty when she quit Twitter last week. But she’s also gotten plenty of criticism from people who called her a bully and weren’t sorry to see her go. One of those people? Courtney Stodden, who says Chrissy has been a bully to her “for years”

THE ASHLEY’S REALITY ROUNDUP – RIP to a beloved member of the Bad Girls Club: Deshayla Harris, better known as “Shay,” was killed after a mass shooting in Virginia Beach that left two dead and eight injured

CELEBITCHY – One detail about Lil Nas X’s latest ventures that I somehow overlooked until now? His tie-in with current most popular song in the world “Montero” is a line of shoes literally called “Satan Shoes.” And the air bubble soles have the man’s blood mixed into them like a Kiss comic book

JEZEBEL – It’s a few days old now, but this story about how Prince William is (very, very apparently) the Sexiest Bald Man In The World had the best headline

REALITY TEA – RHOC star Tamra Judge’s son Ryan Vieth had some thoughts about racism and homophobia, and he sure did share those thoughts in a completely public forum

GO FUG YOURSELF – Red carpets are almost all the way back: “The NAACP Awards Drew Heavy Hitters in High Fashion”

THE BLAST – A slippery mess seems like a particularly bad way to have a gender reveal. Maybe they got the idea from Miss O’Brien on Downton Abbey

DLISTED – According to Sharon Stone’s new memoir, she once went under for breast implant surgery and awoke to find that the surgeon had given her a bigger pair of implants without her consent