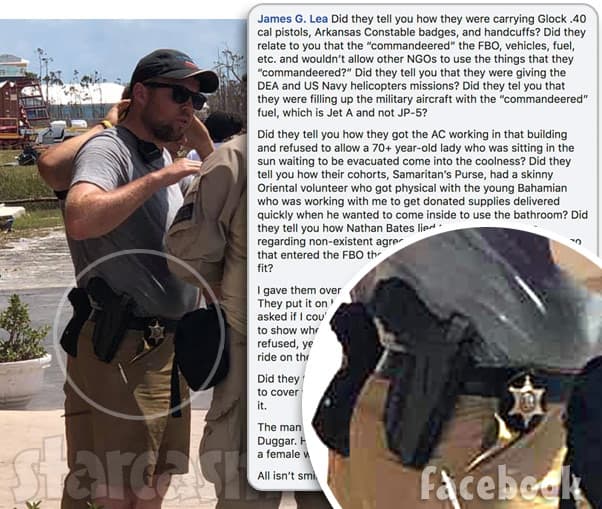 Members of the Duggar and Bates families were recently in the Bahamas to help with Hurricane Dorian relief efforts in the area. Their efforts were orchestrated by MEDIC Corps, a limited liability corporation formed in December of last year by John David Duggar, Kenneth Bates, and Dr. Esli Gollapalli. (Not to be confused with Medicorps, a non-profit international volunteer organization and charity that got its start in the late 1970s.) The Duggars’ desire to help the Bahamian victims is admirable, but some of their tactics are being called into question — including carrying weapons, handcuffs, and badges.

The controversy began after WJXT reporter Vic Micolucci shared a first-hand story about the hurricane relief efforts in Marsh Harbor. However, his story wasn’t so much about the aide received by the victims of the storm, but it was about how his cameraman managed to get pizza and Chick-fil-A sandwiches flown in for the MEDIC Corps volunteers (including the Duggars and Bates) to eat.

“Needless to say, the team loved it,” Vic reported. “They deserve so much more, but how incredible is this? I’m not worthy to be with such saints.”

The story was accompanied by a photo of a few of the MEDIC Corps volunteers sitting in comfortable chairs eating Chick-fil-A chicken sandwiches:

THANK YOU, JESSE 🇧🇸 News4Jax photographer, Jesse Hanson, is helping Hurricane Dorian volunteers in the Bahamas one pizza and Chick-fil-A sandwich at a time. https://t.co/EVluGz21l9

The article was shared by Vic on Facebook, and another Dorian relief volunteer responded in the comments by painting a different picture of these “saints.”

Former freelance storm chaser and cinematographer James Lea informs Vic that the MEDIC Corps volunteers “neglected to tell you that several of our pilots each day brought hot food, Krispy Kreme doughnuts, fruit, and other ‘normal’ food. They were eating just fine. And they were working in an air conditioned office. Unlike the other NGO workers who were sleeping in tents and hammocks which were hung from the broken airport perimeter fence.”

Vic went into further detail with a lengthy post that included numerous allegations about MEDIC Corps’ questionable methods and actions:

Did they tell you how they got the AC working in that building and refused to allow a 70+ year-old lady who was sitting in the sun waiting to be evacuated come into the coolness? Did they tell you how their cohorts, Samaritan’s Purse, had a skinny Oriental volunteer who got physical with the young Bahamian who was working with me to get donated supplies delivered quickly when he wanted to come inside to use the bathroom? Did they tell you how Nathan Bates lied to me several times regarding non-existent agreements to give them all of the cargo that entered the FBO there so they could deliver it as they saw fit?

I gave them over 3000 lbs of cargo on the first day I was there. They put it on helicopters and took it to who knows where. I asked if I could ride along on one trip to shoot photos and video to show where the cargo we imported was going. They flatly refused, yet they seem to have hoodwinked you and given you a ride on the helicopter.

Did they tell you that the fuel for which they are asking $20,000 to cover was “commandeered?” They didn’t pay for it. They took it. 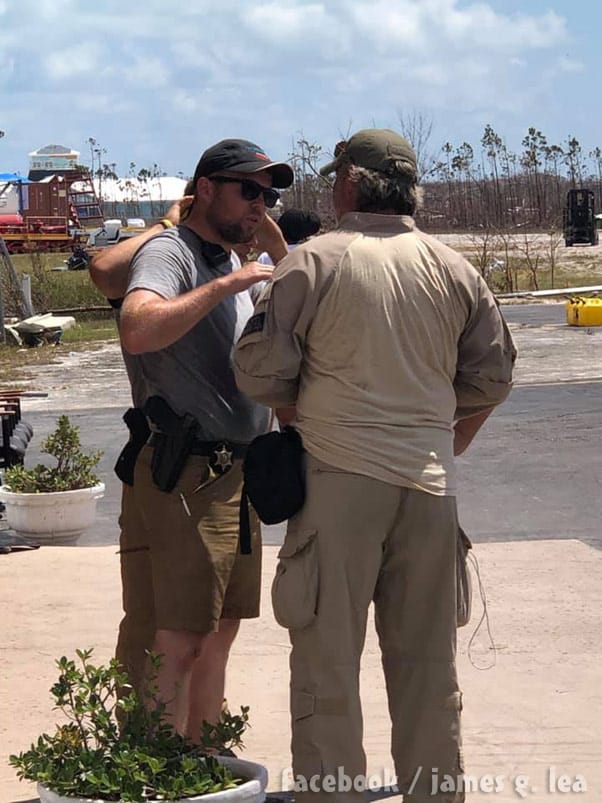 The man with the gun and badge in the photo is John David Duggar. He is being belligerent with the security guy we had for a female worker who spent a lot of time in the really bad areas.

All isn’t smiles and chocolate bars in Duggar and Batesville.

Some clarification from James on some of the terminology he used:

FBO = Fixed Base Operator, the place where General Aviation aircraft go at the airport.

Military aircraft burn JP5, not Jet-A. They are two different types of fuel. The military also doesn’t fuel their aircraft with fuel that hasn’t been subject to a strict chain of custody.

In addition to the photo of John David, there was also a photo of Lawson Bates with gun, handcuffs, and a badge.

James shared a screen cap of his text message conversation with a representative from the U.S. State Department:

James not only criticized MEDIC Corps and Vic, he also called out “real journalists” for not investigating further and lamented that “gossip rags” (like Starcasm) are the only ones reporting on it:

It pains me that the gossip rags are the only ones following this. Instead of actually investigating and following up on leads, they are simply posting screenshots of my allegations. Although I know that I am telling the truth, without their actually doing an investigation and reporting what they find, this will be swept under the rug and I will likely be crucified for blowing the whistle. I looked up to the Duggars as role models for bringing up a large family and my heart is grieved to have witnessed what I saw and to have been the one to break the news. I pray that a real journalist actually takes on the challenge to prove me wrong and in so doing corroborates my account of things.

It appears that no real journalists desire to dig down to the truth about this. I would have hoped that Vic would have wanted to dig, but there has been no response.

To the *journalists* from the gossip rags, don’t waste your time contacting me. I’m not going to give you a smear story for your rags. I have related here what I saw with my own eyes and heard them say with my own ears. Get off your butts and go down there and do some digging. Find out the truth about what has happened and what is happening. It’s not that hard to do. I’ve been a journalist for nearly 30 years and I am appalled at the lack of investigation that is done on stories nowadays.

I have no vendetta against the Bates nor Duggar families. In fact, my family is friends with some of their friends and I sincerely hope that the people who are over in Marsh Harbor with MEDIC Corps will see that they way they have been handling things is wrong and that they will change for the good.

I have written the truth. Believe it or don’t believe it, I can sleep well knowing that I have been truthful about this.

I’ve got nothing more to say on the matter. If you want to know more, go down there and start digging. You’ll find that what I have written is true.

I want to argue that coverage by “gossip rags” like ours, which often have millions of page views per month, can play a major part in giving a story like this exposure. Perhaps then one or more “real journalists” with the resources available will “get off [their] butts and go down there and do some digging.”

In addition to their on-site tactics being called into question, there is also a great deal of suspicion surrounding MEDIC Corps’ plea for donations. The corporation issued a press release on September 2 in which they reveal that “the expected cost of this short-term rescue mission is projected to be $15,000 – $20,000. Any financial support provided will be used to purchase fuel and supplies in support of rescue efforts.”

The press release states that “Medical Evacuation Disaster Intervention Corps is a Christian, non-profit rescue organization that provides medical evacuation assistance and logistical support in times of crisis.” That seems to suggest that any donations will be tax deductible. However, that is not necessarily the case.

The rescue/relief team left for the Bahamas early this morning. They’re currently on the ground there! We’ll continue to update as we’re able. Continue to pray for all affected! #HurricaneDorian #DisasterRelief #MedicCorps

Also, MEDIC Corps is a limited liabilty corporation, so how can it also be a non profit? Attorney Rebecca DeSimone explains that it is possible, but not common:

Nonprofit organizations are usually formed as corporations, but can an LLC be a nonprofit? The answer is a resounding: maybe. A limited liability company (LLC) or a Low-Profit LLC can exist as a nonprofit limited liability company, if the LLC is completely owned by the single tax-exempt nonprofit organization and the LLC meets a dozen requirements as set forth in an IRS mandate called: “Limited Liability Companies as Exempt Organization Update.”

Click here for the rest of Rebecca’s article on the topic, which explains at length why non-profit LLCs are so rare.

I should also point out that John David Duggar is the registered agent for Medic Choppers, LLC. That corporation was filed in January of this year. It is unknown if Medic Choppers was involved with the Bahamanian relief efforts.