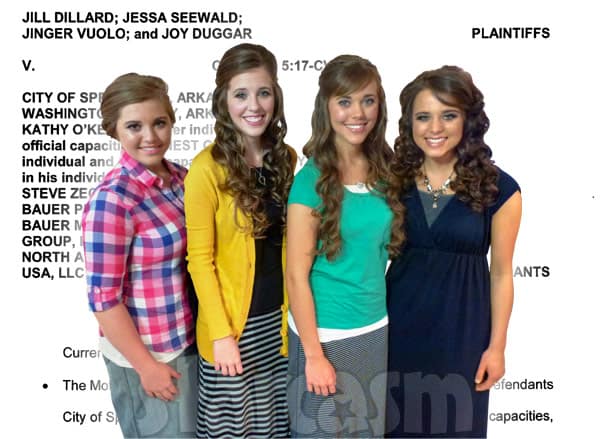 Duggar sisters Jill Dillard, Jessa Seewald, Jinger Vuolo and Joy Forsyth appear to have scored a major victory this week in their civil lawsuit seeking damages against local city and county officials as well as the parent company of In Touch Weekly after the release of information regarding their molestation by brother Josh Duggar. City and county officials filed a motion to dismiss the lawsuit earlier this year, but on Friday a Judge issued a ruling almost entirely in favor of the Duggars — allowing their suit to move forward.

The motion to dismiss in question was filed on behalf of the City of Springdale and Washington County in addition to individuals Ernest Cate (Springdale City Attorney), Cathy O’Kelley (Springdale Police Chief), Rick Hoyt (Sheriff’s Office enforcement major) and Steve Zega (Washington County Attorney). Honorable Timothy L. Brooks ruled that Ernest Cate and Steve Zega were exempt from the official capacity claims in the civil case in regards to violations of the the Duggars’ Constitutional rights because they were advisors and did not have “final policymaking authority,” as required by the statute for official capacity liability.

Otherwise, Judge Brooks sided almost entirely with the Duggars. Of course, that is due largely to the fact that he was required to accept their presentations of the facts of the case as true when making his decision. As he explains in the ruling: “The court must accept all of the Complaint’s factual allegations as true, and construe them in the light most favorable to the plaintiff, drawing all reasonable inferences in the plaintiff’s favor.”

The most important thing that I took from Honorable Timothy L. Brooks’ ruling is his recognition of an Arkansas State Statute which explicitly stated at the time of the FOIA disclosures to In Touch Weekly that “..any data, records, reports, or documents that are created, collected, or compiled by or on behalf of the Department of Human Services, the Department of Arkansas State Police, or other entity authorized under this chapter to perform investigations or provide services to children, individuals, or families shall not be subject to disclosure under the (Freedom of Information Act).” Judge Brooks determines that the individuals and the civic entities named in the suit were expected to be aware of the statute at the time the documents were released, which sure seems to bode well for the Duggar sisters!

You can CLICK HERE for the entire 27-page document, which is packed with legalese, but seemingly written specifically for curious “normal” folks like myself. To be honest, I was a bit surprised by the glimpses of flair and candor by Judge Brooks. For example, he makes it a point to clarify that his ruling to allow the case to move forward will have no bearing on whether or not the Duggar sisters will win or not. “Going forward,” he writes, “the devil will be in the details revealed by the discovery process.”

It is my understanding that there are also motions to dismiss filed by some of the individuals named in the suit, as well as the various corporate entities associated with In Touch Weekly. The liability issues for them are completely different from the government agencies and personnel responsible for the release of the documents, so it will be very interesting to see how a judge rules on those motions. (For instance: In Touch Weekly filed for release of the documents through a FOIA request and the documents were released to them by government officials. To what extent are they liable for knowing that the government officials may not have had the legal right to release them?)

In addition, Josh Duggar has removed himself from his sisters’ lawsuit and filed a separate one of his own seeking damages. The particulars of his case are quite different as well, especially given that In Touch Weekly named Josh Duggar as the target of an “underage sex probe” prior to the documents actually being released. His case against In Touch Weekly would seem a lot stronger than his sisters’, and his case against the city and county might be weakened. Of course, those are the opinions of a celebrity blogger with absolutely no legal background outside of watching Law & Order and researching posts just like this one.

Here are some excerpts from this week’s ruling, with citations removed for ease of reading. As it mentions several times below, it is VERY important to remember that any conclusions reached by the Judge HAD to assume that the facts alleged by the plaintiffs (the Duggars) are true (within reason).

Accepting these allegations as true, and drawing all reasonable inferences from them in the Plaintiffs’ favor (as the Court must do at this stage of this case), the Court finds that the Plaintiffs have alleged facts that make out a violation of their constitutional right to privacy. It is difficult to imagine a more “shocking degradation” or “egregious humiliation” than:

(1) to endure the public disclosure of the fact that one was sexually molested by one’s own brother as a child;

(2) for that disclosure to immediately erupt into a nationwide scandal, and

(3) for that disclosure to have been made under circumstances in which the national media feeding frenzy that ensued would have been entirely predictable to any reasonable person in the position to make the disclosure in the first place.

And the facts alleged in the Complaint show that the Plaintiffs had “a legitimate expectation that the information would remain confidential while in the state’s possession” given that:

(1) at the time they shared the facts of their victimization with police investigators, they were assured that those facts would remain confidential

(2) at the time the individual-capacity Defendants made the FOIA disclosures to In Touch Weekly, an Arkansas statute explicitly stated that “any data, records, reports, or documents that are created, collected, or compiled by or on behalf of the Department of Human Services, the Department of Arkansas State Police, or other entity authorized under this chapter to perform investigations or provide services to children, individuals, or families shall not be subject to disclosure under the (FOIA).” and 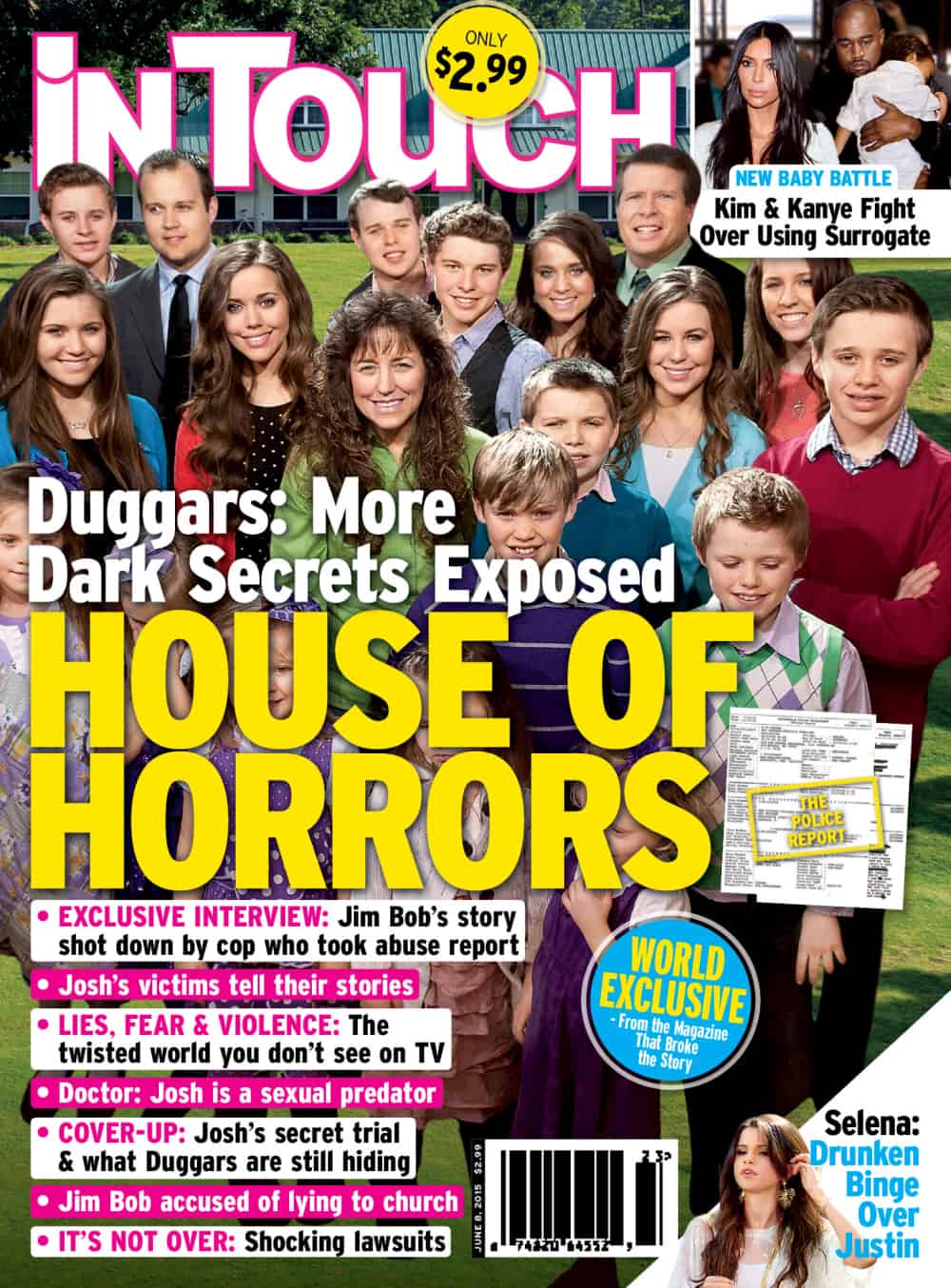 The Complaint alleges that the identities of Josh Duggar’s victims were not in the public record before the FOIA disclosures were made. Thus, regardless of whether the victim-identifying information came first from a City employee or County employ, it was not merely “further publicity” about Josh Duggar, but rather it also contained facts about all of those Plaintiffs’ lives which were not matters of public record.

As the Court has already observed above, taking the facts alleged in the Complaint as true, any reasonable person in the position to make these disclosures would have understood that these disclosures would be published, would cause a national scandal, would be a “shocking degradation” or “egregious humiliation” for the Plaintiffs, that the Plaintiffs had a “legitimate expectation” of confidentiality in these materials, and that disclosing these materials would therefore violate the Plaintiffs’ constitutional right to privacy.

When evaluating the egregiousness of the conduct at issue, the Court must be “mindful of the importance in which our society and the … law has held” the interest of which that conduct has run afoul. Our society places the utmost importance on the protection of minor victims of sexual assault. Individuals who are convicted in this Court of committing sex crimes against minors consistently receive sentences that are among the harshest that this Court imposes on individuals who appear before it — and that is often the case even after varying downward from the sentencing range that is recommended by the United States Sentencing Guidelines for the offense of conviction. Furthermore, it seems likely to the Court that protecting the identities of such minor victims is one of the primary purposes of the FOIA exemption at Ark. Code Ann. § 12-18-104(a) that has already been mentioned several times in this Opinion.