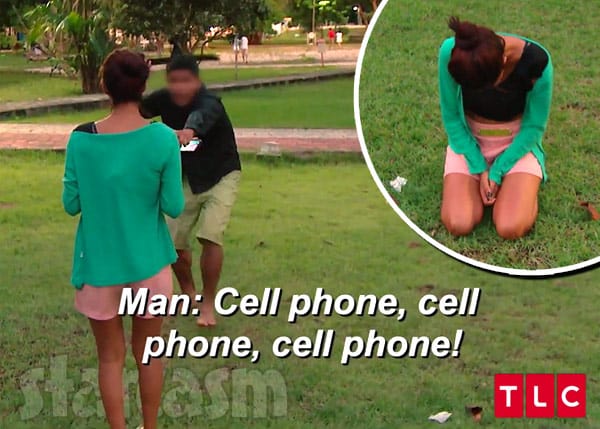 I often times get so caught up in the awkward relationship drama on Before the 90 Days that I forget these meetings are taking place in foreign countries where completely unexpected things can happen — like getting mugged by a guy with a machete! While TV cameras are rolling!!!

In a terrifying new preview clip for this week’s episode, we see Karine walking in what looks to be a public park of some sort when she is approached by a maniacal man holding a large machete above his head. “Give me your cell phone!” he screams. As he gets next to Karine, who appears to be in shock, he continues to yell: “Cell phone, cell phone, cell phone!”

Amazingly, the mugger approaches Karine after apparently taking another woman’s cell phone who looks to be jogging on a running path. The mugger attempts to hide his face from the camera, but I am guessing the footage will be more than enough to identify him.

After taking Karine’s cell phone, the man and an accomplice run into a wooded area beside a large concrete wall. We later see police arrive on the scene and follow the man’s path into the woods.

Once the ordeal is over, Karine is shown on her knees crying. As the camera crew try to compose themselves, they gather up Karine and usher her away from the park. While she walks away, a very emotional Karine announces: “I want to leave. I don’t want to be with Paul anymore.” 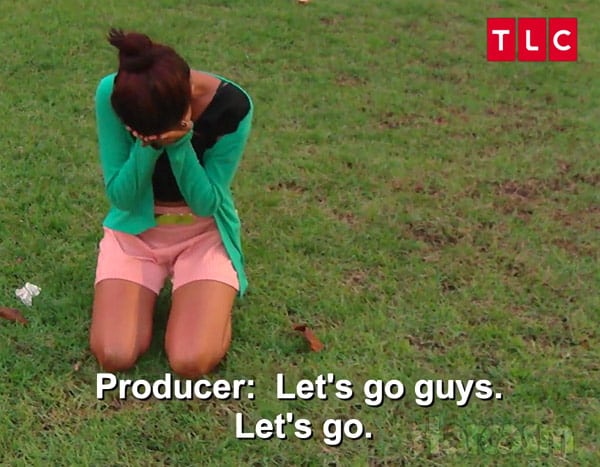 It’s not completely clear where Paul is during the mugging incident, but he is shown at the beginning of the clip struggling with encountering some rather nasty looking water as he argues with Karine. “It’s your choice,” Karine says. “I’m not doing this anymore.” We then see Karine leaving a wooded area (where Paul is?) as she enters the park.

In another new preview clip, Paul FINALLY tells Karine about his criminal past, which includes a felony arson conviction and an arrest (but no charges) after he violated a protective order by contacting his ex-girlfriend.

After revealing the information to Karine, she seems incredulous. Paul kinda freaks out and literally runs away — rather awkwardly. “That’s garbage, right?” Karine asks a producer. Paul explains in an interview recorded later that Karine doesn’t deserve “damaged goods.”

I should point out that the scene looks like it takes place in the same park as the mugging? Karine is definitely wearing the same clothes. Perhaps she goes after Paul, and then returns to the park? We will have to wait for the episode for the exact timeline.

Meanwhile, if you are concerned that Paul’s confession was a deal breaker for Karine, there is no need to worry (yet).

SPOILER ALERT! Paul and Karine stayed together after his confession. Karine even seems to have a sense of humor about it as she and Paul modeled sexy cop and convict Halloween costumes earlier today! 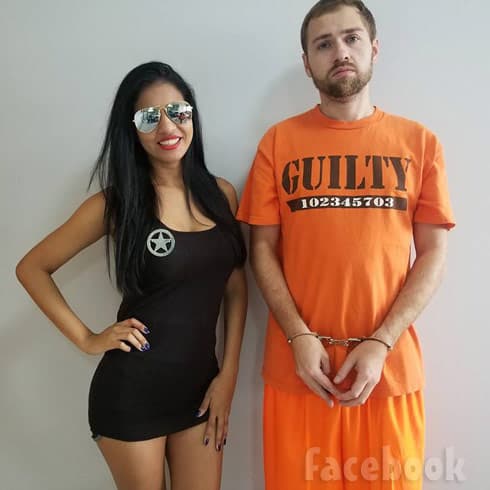 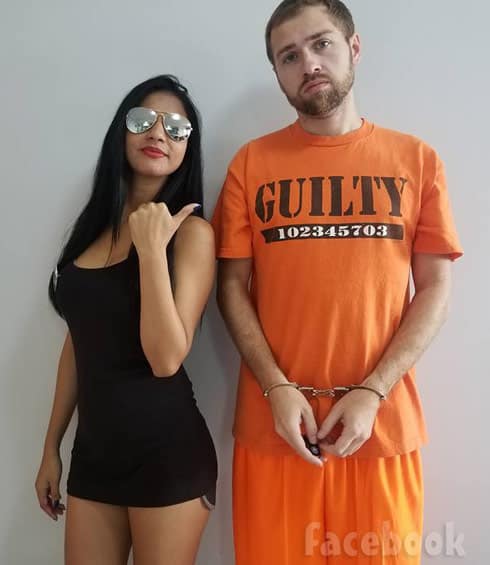 Paul posted the Halloween costume photos on Facebook, but unfortunately that may be one of his last soshull meedya entries for a while. “I am no longer allowed to post on Facebook,” Paul posted moments ago. “Any questions please refer to Karine. Thank you.”

Perhaps aware that Paul’s Facebook ban was imminent, Karine captioned the Halloween photos with “Tenho sentenciado a prisão de Paul para Facebook,” which I believe translates to: “I sentence you to Facebook prison.”

In case you are wondering why Paul has been banned from using Facebook, I assume it is because he continued to reveal too much information about the show prior to the episodes airing. In his most recent TMI session, he and Karine got into a heated argument before she ditched him to go out or a nigh ton the town with her friends. (You can read all about that spat here.)

Earlier today, Paul provided an update on the spat to his Facebook followers, much to the chagrin of Before the 90 Days producers I’m sure. “Karine Martins came home last night,” he wrote. “Feeling Sad in tears over the Facebook posts. I in no way meant to offend her or make her feel bad or obligated to return.”

In the comments section, Karine shook her damn head and wrote: “stop talking about our life Paul Staehle ???”

Obviously, the fact that producers care what Paul is posting on Facebook is a clear indication that we will be seeing more of him and Karine on TV in the future! Hopefully without any more mugging incidents.

The new episode of Before the 90 Days — which YOU DO NOT WANT TO MISS because EVERYONE will be talking about it on Monday — airs Sunday night at 9/8c on TLC.

UPDATE – Paul returned for one last Facebook post (again), but this time it was to issue a warning to people threatening his family with pranks and/or harassment:

To people talking about pranking or harressing my parents. If you value your life you won’t. This is not a threat it is a warning. Me father takes no sh!t from anyone. Any other questions you can contact karine. I am not posting or responding to posts or messages.

I’m a huge fan of the show, and I have noticed that the online fan community has really shifted over the last few weeks. Initially, it was all about how entertaining the show and the cast members are. Of course, there were folks making jokes, memes, and more at the cast members’ expense, but it wasn’t hateful or especially mean spirited. That has changed dramatically. I still go to all the groups and forums to keep up on things for this site, but I no longer enjoy a lot of them as a fan of the show because there is so much emphasis on viciously attacking and demeaning the cast. I know my comments here won’t mean a damn thing — much like Paul’s threat above probably won’t either (it will actually make things worse I am guessing) — but I just wanted to acknowledge the unpleasant shift because it really sucks. Yes, they chose to be on a reality show, and yes, everyone is free to say what they want within the limits of the law — but damn.