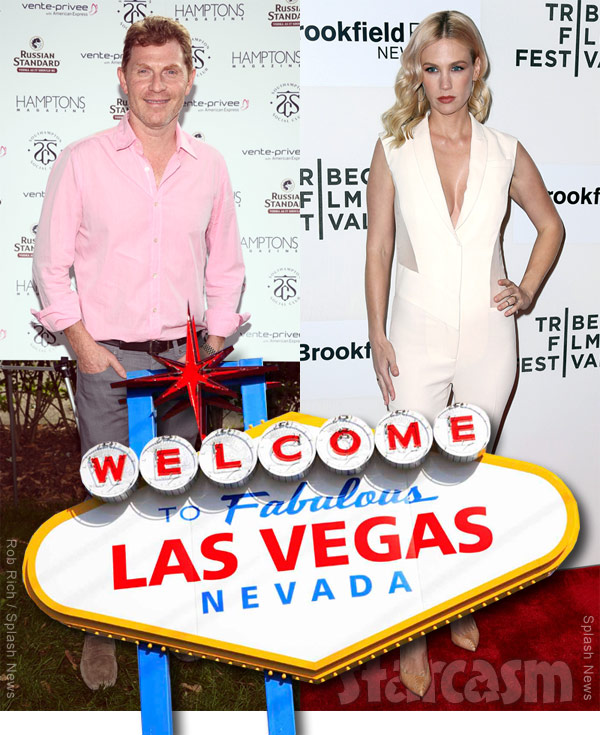 Actress January Jones is in a bit of hot water after crashing her Range Rover into a couple of parked cars and then leaving the scene of the accident amid allegations she had been drinking. The story got even more bizarre when Jones reportedly called Food Network celebrity chef Bobby Flay on her cell phone just after the accident and, according to a witness on the scene, he arrived ten minutes later and appeared to instruct Jones to go home – which she did.

Jones called 911 from home and later returned to the scene of the accident wearing different clothes and chewing gum. (You can read all the amazing details about January’s shifting story and her proud history of alcohol abuse HERE)

So why in the world would she call Bobby Flay of all people? As I mentioned in my previous post, both Jones and Flay had been at a LA Lakers playoff game viewing party at the The London West Hollywood Hotel and had exchanged numbers because she was looking for someone to redo her kitchen. What? Here’s the 411 from TMZ:

A woman who owns one of the cars that was hit tells TMZ … she heard the crash, looked over her balcony and saw Jones. She says around 10 minutes after the crash, Food Network star Bobby Flay showed up in a separate car, began talking with her and telling her to leave the scene, which she did.

We spoke with Flay, who tells us he was watching the basketball game last night at The London West Hollywood Hotel with a group of people that included Jones. Flay says he saw her drink a beer but wasn’t really watching her alcohol intake. Flay says he had only met Jones once before, and last night she asked for his number because she wanted to redo her kitchen and give his number to her designer. Flay obliged, and says he doesn’t know why Jones chose to call him after the crash, but nonetheless he drove over to help her. He says he did not argue but just wanted to make sure she was ok.

While doing research on the story I ran across this picture on a woman’s Facebook page: 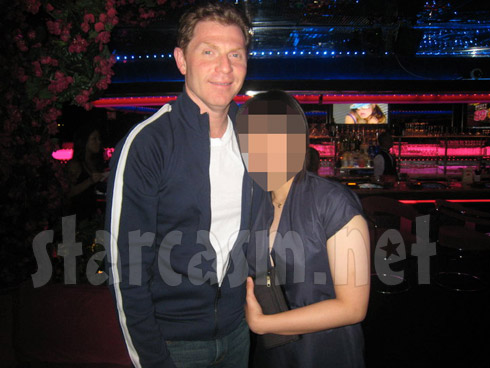 It’s a photo of the woman with Bobby Flay (she tagged and titled it as such) taken at the Peppermill Lounge in Las Vegas and uploaded to Facebook on May 13. The woman in the photo claims that Bobby was with an attractive blonde woman at the time, but it wasn’t Bobby Flay’s wife Stephanie March, it was January Jones! The caption describes Flay as being “hammered” and states that Jones did not want to be photographed.

Was this when Bobby Flay met January Jones “once before?” Getting “hammered” at a bar in Las Vegas?

I talked with the woman to clarify that it was in fact January Jones and not Bobby Flay’s wife Stephanie March, who looks very similar. This is what she had to say:

“I had seen the two at the lounge inside of Peppermill at Las Vegas. At first I thought the lady he was with was his wife. They were both sitting close to each other and they both were drinking alcoholic beverages. When I went over to ask for a picture, to my surprise the woman he was with was January Jones.

“He seemed a little tipsy, his face was red and he seemed super relaxed. January on the other hand didn’t seem she was intoxicated yet. When I was leaving, they were both in the booths where the fireplace was. At the Peppermill, the fireplace area is where the ‘couples’ usually sit. They were sitting very close to each other, talking, laughing, and slight touching involved. It looked a lot like they were just flirting back and forth with each other. They looked like they were an item. I thought maybe his wife and him had gotten a divorce but I checked online to my surprise that he was still married? So I don’t know what the deal is.. But I believe there is something there.”

Given the recent developments I could imagine someone misremembering something like this in hopes that they saw something newsworthy, but this was a photo and description from almost a month ago! I’m trying to pin down their schedules to verify they were both in Las Vegas at that time.

Here is a photo of Bobby Flay and his wife Stephanie March at the NYC Opera Spring Gala from March of 2010 (Photo: L. Gallo/WENN.com): 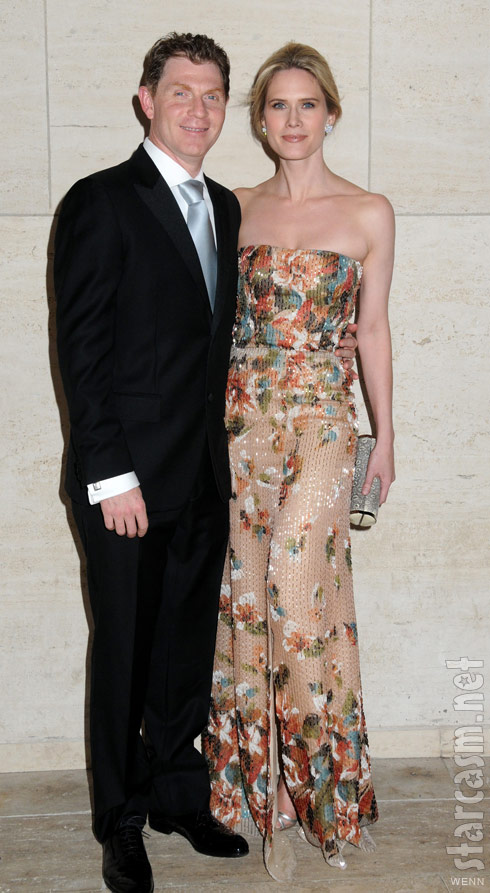 Jones’ rep says “While being followed by paparazzi, Ms. Jones struck two parked cars.” Although LAPD is now saying 2 cars were hit, this morning they said 3 parked cars were involved — consistent with a witness.

Jones’ rep also says, “There was no alcohol involved and there is no investigation pending.” And cops tell TMZ no crime was committed.

The rep says, “She did not flee the scene; she left her license with a witness and walked to her nearby home to call the police.”

There is no mention at all about Bobby Flay and her story contradicts Flay’s because he said she called him from her cell phone, which would mean she could have used her cell phone to call 911 instead of returning home. For that matter, Flay could have called authorities himself.

There is a lot of smoke here, and I’m guessing there is some kind of fire. I’m assuming that this is merely January Jones trying to cover up the fact she had a few drinks and then plowed into some parked cars while inebriated. If that’s the case, then we will probably hear soon enough from people at the party as to whether or not she actually had been drinking.

If the smoke is coming from a different kind of fire, then I’m sure that will all come to light soon enough as well. TMZ has their hunting dogs on the case and unless January Jones secretly adopted an African American baby from New Orleans, they are going to sniff out the truth!

UPDATE – Bobby Flay and Stephanie March announced they were separating in April, 2015. A little more than a month later it was reported that Stephanie claimed Bobby Flay committed adultery with January Jones on several occasions in 2010! Click here for more details! (We swapped out the top image after the new reports surfaced.)