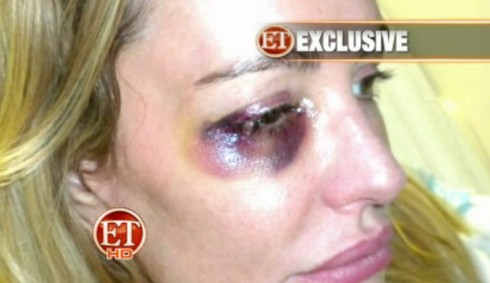 Real Housewife of Beverly Hills Taylor Armstrong received a six-figure deal for selling the brutal image you see above according to Page 6.

The image was posted last week by Entertainment Tonight as part of a teaser video for an interview with Nancy O’Dell featuring Taylor Armstrong that will air today. The photo is allegedly the result of a beating that Taylor suffered at the hands of her late husband Russell Armstrong. This will be Taylor’s first interview since Russell’s suicide a month ago.

According to the report ET was the only news outlet willing to pay the type of money that Taylor was looking for. They also stated that Taylor is broke and in need of the money. Neither ET or Armstrong’s reps had comments when contacted by Page 6.

According to a promo for the interview, “Taylor will reveal details … about the bruises that she says were caused by her late husband.”

Do Celebrities pay people to be their friends?

AMERICAN HORROR STORY Who is Michael Langdon and what is The Cooperative?