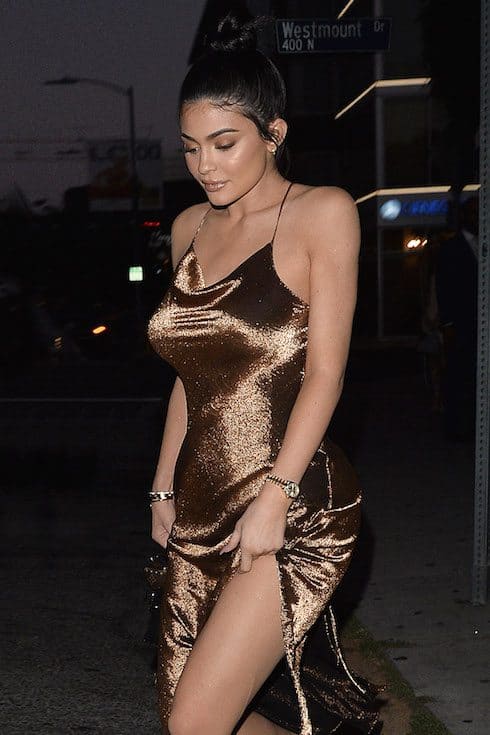 Kardashian pregnancy gossip may have just reached critical mass. According to the latest allegations, it’s possible that Kylie Jenner has already brought her first child into the world–and her family, in typical top-secret fashion, is simply trying to figure out the best way to reveal the news.

Before we go down this particular rabbit hole, recall that the most recent (anonymously sourced) report has it on good authority that Kylie is about four-and-a-half weeks away from her due date. There’s also been a fair amount of speculation that she may have had an abortion at some point earlier this year, though some of that speculation stems from the fact that Kylie has neither acknowledged reports she’s pregnant nor been seen in public much at all for months. (In fact, she recently released a batch of nude behind-the-scenes photos to distract from the baby bump clamor.)

So — did Kylie Jenner give birth already? This post from Jezebel brings attention to what the “baby bump detectives” have been working on. Their logic hinges on four pieces of supposed evidence:

1. The video of Kylie dancing in a tight dress appears to feature a baby bump of some kind. The footage was shot after the Golden Globes in January 2017, meaning that if it does feature a baby bump, Kylie would have given birth months before now.

2. This photo, taken by a long-lensed paparrazo at the birthday party Kylie threw for best friend Jordyn Woods back in September, appears to show Kylie resting her hand on what may be a pronounced baby bump. If Kylie and baby daddy Travis Scott did conceive in June, it’s unlikely — though not impossible — that Kylie would have been showing so early. (She’s wearing the loose, baggy clothing typical of pregnant Kardashians, though, so it’s difficult to say.)

3. The 2017 Kardashian Family Christmas Card was, for some reason, completely without Kylie. And Kylie was also absent from the family’s second public Christmas photo.

4. Kylie hasn’t shared any full-body or waist-up photos on Instagram in over three months — and it’s likely, given her hairstyles, that those photos were taken well before the dates on which they were posted. She’s also been far less active than usual on Snapchat and Twitter.

Does any of that prove the rumors? Of course not. Also, what would be the point of keeping an already-birthed baby a secret? It’s not like Kris Jenner doesn’t have the media savvy or PR connections to knock out a publicity campaign for her youngest daughter on the fly.

Given all that, then, it seems entirely fitting that the final Kylie Jenner story of a year devoted to both ever-widening conspiracy theories and the Kardashian pregnancy craze, would also be the one to fuse both elements. Happy 2018, Kylie’s still-unconfirmed unborn baby or potentially just-outed newborn!

(Photo credit: Did Kylie Jenner give birth via All Access Photo / Splash)

Lamar Odom’s mistress advises Khloe Kardashian to get a divorce, warns there are other women